As you might expect, TV newsers had differing opinions about President Trump’s second State of the Union address, one that was given last night after having been delayed by a week due to the partial government shutdown.

The consensus among conservatives, both on TV and in politics, was that Pres. Trump was extending an olive branch to Democrats with the remarks he made during his address. Democrats, however, didn’t seem to buy that. They occasionally rose and applauded, but mostly sat in silence throughout.

“That chunk about immigration was so directed to the people who elected him,” Matthews continued, referencing Trump’s remarks about undocumented immigrant crime and migrant caravans, which were described as an “onslaught” at the border.

Also on the MSNBC side –which, as you might expect, was highly critical of the address– Rachel Maddow was able to get Minnesota Democratic Senator Amy Klobuchar to declare on-air that on Sunday in Minneapolis, she’ll be making an announcement regarding the 2020 presidential election.

Sen. Klobuchar tells @maddow that she will be announcing her decision on a 2020 presidential race on Sunday at Boom Island in Minneapolis. pic.twitter.com/kG8nvvS40H

Over on CNN, Jake Tapper talked about inconsistencies in Trump’s address, calling them “moments of whiplash.” The president made comments about immigration that seem to be at odds with what Democrats believe; but he also created unifying moments, such as honoring a soldier who helped liberate Dachau, and honoring a 10-year girl named Grace, who recently finished chemotherapy and thankfully shows no evidence of cancer. The president also brought up criminal justice reform and increased investment in infrastructure, issues that Democrats support.

Tapper basically summed up his thoughts by saying Trump’s address was a “hodgepodge of unifying and combative.”

Van Jones on CNN: “A psychotically incoherent speech, with cookies and dog poop.”

Over at Fox News, Chris Wallace said Trump’s speech “was not effective in trying to make legislative progress in 2019.”

“I didn’t see any Democrats be rude to the President,” added The Five co-host Juan Williams, a Democrat.

“There was a lot for people on both sides of the aisle to really love here,” countered Laura Ingraham.

Sean Hannity talked to Eric Trump after Fox News’ State of the Union coverage, with the son telling Hannity that his dad’s speech was “the best he’s ever given.”

Agree —this may have been the best speech he’s delivered. Maybe better than Poland & Saudi. The speechwriters weaved in the emotional personal stories in a way from start to finish that almost forced Dems to cheer. SOTUs are tough-this was a well-written -well-delivered SOTU. https://t.co/efDl47kNlT

Some on the right accused Democrats of not cheering the president enough during the speech. Democratic congressman Brad Sherman of California pushed back on that during his Fox News appearance:

Cheering for those D-day veterans, for the first prisoners released as a result of the president’s First Step Act prison reform, Matthew Charles. And in a sweet, somewhat odd moment, the chamber singing Happy Birthday to a Holocaust survivor, survivor of the Pittsburgh synagogue shooting.

The ABC News chief news anchor also pointed out one of the more surprising moments of the night, saying “the biggest unity came in an inadvertent moment, when the president congratulated the women members of Congress. They rose up in one, he said, ‘you weren’t supposed to do that.'”

Stephanopoulos also brought up one of the most controversial remarks from his address, talking about the investigations against him:

… One line that did not get love from Democrats, if there’s going to be peace in legislation, there cannot be war in investigation. The president making an interesting choice there, to bring up the investigations, the Robert Mueller investigation – he didn’t say it by name – a choice that echoes Richard Nixon, who brought up Watergate, said it must end in 1974. In 1998-99, Bill Clinton didn’t mention the investigations at all.

I think he gave Democrats there tonight a lot of opportunity, if they wanted to, and they didn’t take much of it, to applaud. Whether it was lower prescription drug prices, whether it was coming together on issues like infrastructure, and he wanted to draw a line, too. That he was going to make sure they understood that if investigations got out of hand by the Congress, that it was going to slow their ability to do the kind of bipartisan things he was recommending.

Booker said President Trump’s “teleprompter is very different than his tweets” and that it was a “disappointing speech.”

“The state of our union is in limbo. The government is only funded for the next 10 days unless they hammer this out,” Face the Nation moderator Margaret Brennan said of the border wall fight.

Brennan on Trump’s comments on female job gains, which prompted an ovation from Democratic congresswomen: “Yes, they may be celebrating the job growth, but they may be thinking of the seats that were flipped into Democratic-controlled jobs.”

“There were cheers and applause from Democrats when he talked about female job gains,” said CBS Evening News anchor Jeff Glor. “It was very powerful to see so many Democratic women dressed in white.”

Glor sat down with vice president Mike Pence after the address:

WATCH: Can you guarantee there won’t be another government shutdown?

“Well, I think our hope is that there’s not but I can’t make that guarantee, @JeffGlor. The simple truth is Congress needs to do their job.” — @VP Pence https://t.co/SwVoAcEVYV pic.twitter.com/ydPKN1vO8t

The CBS This Morning quartet appeared on a live edition of The Late Show with Stephen Colbert (they must be exhausted right now!) Norah O’Donnell‘s reaction on Colbert: “He threatened Congress.” That line about investigations “was a threat.”

“He said if there is going to be peace and legislation, there cannot be war and investigation. That was a threat.”@NorahODonnell and the rest of the @CBSThisMorning desk stopped by @colbertlateshow tonight https://t.co/iBDcCgA9nX pic.twitter.com/7aiywpSXXK

NBC News scored an interview with congresswoman Alexandria Ocasio-Cortez and offered this reaction to the president’s comments about “partisan investigations:

“Well, I thought it was, frankly, kind of bizarre. I don’t think that investigations into federal misconduct have anything to do with our economy…In any administration, no matter what party the president is from, if such dysfunction happened, congress would have a requirement to really investigate those things and without doing so, we’d be abdicating our responsibility.” 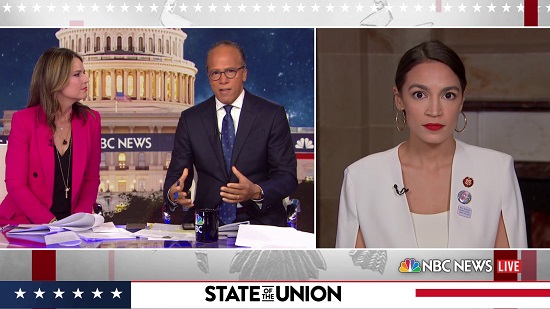 Meet the Press moderator Chuck Todd added: “The only coherent moment … where you felt like they had a point to make, was on immigration and the standoff with congress. Everything else felt like it was all meant to be just additive to the basic point that he wanted to make about his wall and immigration.”

Eric Bolling hosted BlazeTV coverage of the State of the Union afterparty from the Trump International Hotel in Washington. Former White House press secretary Sean Spicer stopped by, and seemed to be in prime party form.

BTW it seems like Spicer had some drinks during #SOTU before his appeareance on BlazeTV lol pic.twitter.com/nFpv6wCxUl