Five employees of the Capital Gazette newspaper were shot dead this afternoon in their own newsroom, and several more are wounded.

This tragedy took place inside the building of the Capital Gazette, – a newspaper in Annapolis, Md. that’s owned by The Baltimore Sun – at around 3 p.m. ET. The gunman is presently in custody.

Five people were killed and several others were “gravely injured” in a shooting at the Capital Gazette office, according to police. A shooter is in custody. https://t.co/ZTw7BuaNAk

Gunman shot through the glass door to the office and opened fire on multiple employees. Can’t say much more and don’t want to declare anyone dead, but it’s bad.

“We’re doing everything we can to get people out safe and we’re trying to minimize the casualties,” Lt. Ryan Frashure, a spokesman for Anne Arundel County Police, told reporters.

Fox News was the first cable news network to report the news of the shooting, doing so at 3:10 p.m. ET. Ironically because this transpired during the 3 p.m. hour, the network’s breaking news anchor Shepard Smith was already on the air to report the news.

Here’s what Smith had to say:

These are live pictures at the Capital Gazette in Annapolis Md.,. we had reports of an active shooter. That was the initial report. reports of a shooting at a building in Maryland. It’s home to one of the nation’s oldest newspapers. You can see the law enforcement coming together outside. We have just gotten word from the sheriff that — this is confirmed now but Fox News — that there are multiple fatalities at this location. Reports of the shooting at the offices of near Washington D.C. at the offices of the Capital Gazette newspaper. This is Annapolis, Md., I have just learned with you that there are multiple fatalities now reported at this location. I must tell you, hardly a day goes by in recent memory that there’s not a report of an active shooter somewhere. They come in so often that most like — most often we spend a lot of time ferreting them out before mentioning them to you. Today we hoped that was the case here. Instead, we have got word from the sheriff that they have multiple fatalities. 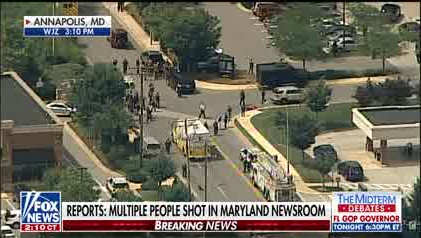 Baltimore Sun reporting there’s been a shooting at a newspaper building in Annapolis, Md., this is apparently at the Capital Gazette building. you can see where that is on the map. we have live pictures now in Annapolis, Md. Very few details now… 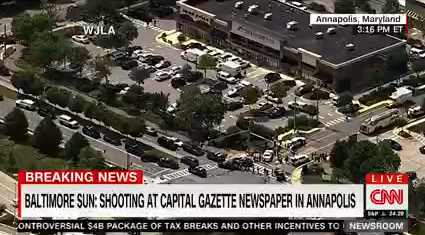 There has been an active shooter situation in Annapolis, Md. We are just getting information in on this now. That is the scene, it is the Capital Gazette building in Annapolis Md., that you are looking at. The Capital Gazette is a newspaper. It is owned by the same owners at the Baltimore Sun. It is the local paper having to do with Annapolis, Annapolis is the capital… 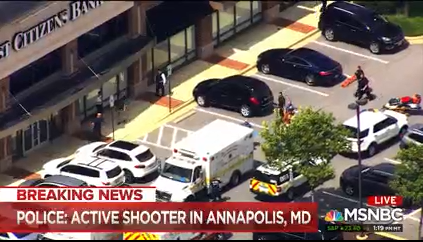 I want to show you breaking news we are keeping an eye on. there are reports out of Annapolis, Md., that the ATF is responding to a shooting, a shooting incident at the Capital Gazette. A reporter with the paper itself said multiple people have been shot. The Capital Gazette which is the paper owned by The Baltimore Sun, by the way, is located in the Capital. We are working to get more developments and provide updates. This is a tweet from the parent company of The Capital Gazette: “We are investigating reports of an incident at the capital-gazette building in the 800-block of Bestgate road in Annapolis. We will share them as we get them.” This is what we are seeing from one of the local affiliates in Maryland, a helicopter. It looks as though it transported someone, air lifted someone. There’s a lot of law enforcement presence and ambulances and fire teams there. So, again, some sort of shooting, reports of at The Capital Gazette newspaper in Annapolis, Md. There’s two helicopters on site. We will watch it, get more details and pass it on to you. 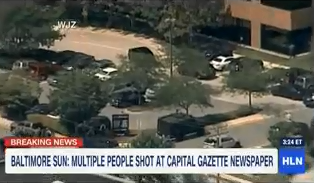 There has been a deadly shooting in a newspaper office in Annapolis, the Capital Gazette. We are following it this hour. Four people have been killed, we’re told. A suspect is now in custody. The Gazette is owned by the Baltimore Sun Media Group. Police are now at the scene of that shooting at the gazette. We’re also told they’re at the offices of the parent newspaper, The Baltimore Sun, but you’re seeing the scene right now. 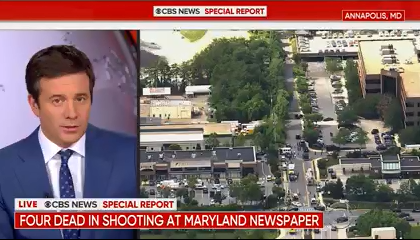 We’re coming on the air with breaking news. a shooting this afternoon in Annapolis, Md. A newspaper owned by The Baltimore Sun. There are no word of the conditions of those shots or numbers. ATF and other officers are on the scene. The building is being searched by police. There’s no confirmation of the number of shooters or if anyone is in custody. 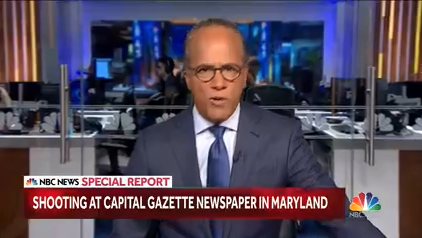 There is an active shooter in their building, and they are still doing their job. I am fucking speechless right now. pic.twitter.com/V4PEmqMU0l

New from Police Chief of @AACOPD:

Shooting suspect Jarrod Ramos carried a pump-action shotgun which he purchased it in the past 18 months. https://t.co/idZo2HFPRA pic.twitter.com/GwuI42WRuJ