NEXT:Report: CNN, New York Times to Team Up on Docuseries About Rupert Murdoch and His Media Empire
PREVIOUS:Oprah Winfrey Joins CBS This Morning with More of the Meghan Markle-Prince Harry Interview 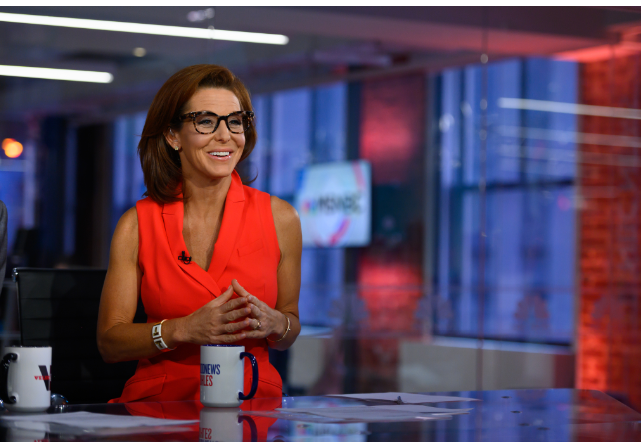 “For the past five years on MSNBC and even before joining the network, I’ve dedicated our show to delivering the most important stories of the day with an all-female lineup, featuring insights from leaders and critical thinkers who are qualified to speak on any number of issues any day of the year, and who just happen to be women,” she told TVNewser. “After spending my early career in banking where there were barely any women in leadership positions, my goal as a journalist is to highlight the impressive work women are doing across all industries every day, not just today.”

Joining Ruhle during the special hour: 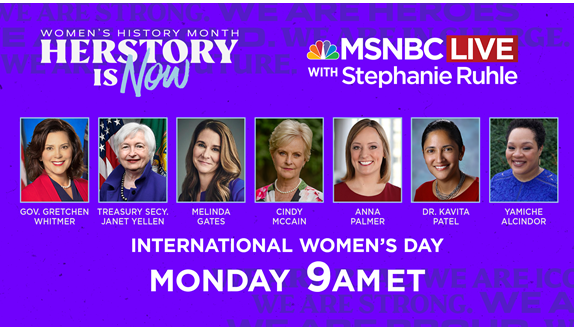 In honor of International Women’s Day, NBC’s Today show will host a live event led by co-anchors Savannah Guthrie and Hoda Kotb that will dive deeper into why the pandemic hit working women and moms the hardest, answering women’s most pressing questions of the moment. The event will also include a special performance to commemorate the day.

Jenna Bush Hager, Sheinelle Jones and Natalie Morales will each host their own Zoom Rooms, comprised of more than a dozen female viewers in which they will address women’s current concerns and burning questions, live on-air.

Additionally, Today will feature an expert panel that will provide insights and advice on how women can get back into the workforce to small business solutions and more. Panelists include:

Additionally, Lester Holt will exclusively interview four Navy commanding officers, all women of color, who for the first time in Naval history, are commanding warships at the same time.

On CBS This Morning, Gayle King interviews Malala Yousafzai for International Women’s Day. Additionally, Stacey Abrams Janelle Monae will be on to talk about collaborating for the documentary All In: The Fight For Democracy.

On Fridays in March, CBS This Morning will look specifically at how the pandemic is affecting women and work, kicked off last Friday with a live segment with LinkedIn’s Caroline Fairchild.

Norah O’Donnell will continue her original series for CBS Evening News, titled, Women & The Pandemic, a look at how Covid-19 is having a long-lasting and disproportionate effect on women, who are more likely to bear the brunt of the financial and societal consequences.

On Wednesdays in March, O’Donnell and the team of CBS News correspondents will offer reporting and interviews, plus deliver context behind new data that reveals just how deep an impact the pandemic is having on America’s women from an economic, cultural and health standpoint.

Over on ABC, Good Morning America kicked off women’s history month with former first lady Michelle Obama – Robin Roberts interviewed her one-on-one. Additionally, Diane von Furstenberg will appear on GMA live – she has a new book of self-created aphorisms A to Z that will be released on International Women’s Day, called Own It: The Secret To Life. There was also be a Deals and Steals segment with Tory Johnson on women-owned small businesses. Plus, GMA3 is featuring U.S. Park Police Chief Pamela Smith, the first Black woman to lead the federal agency in its 230-year history.

Additionally, each Friday in March, The View is celebrating Women’s History Month by featuring women who have broken the glass ceiling in a variety of fields. Each piece will be voiced over by one of the co-hosts.

This past Friday, Fox & Friends featured the story of Sarah Thomas, a trailblazing mother of three who also just so happened to become the first woman to officiate a Super Bowl.

Today, programs across Fox News Channel and FBN will commemorate International Women’s Day by highlighting women who have made an impact within their communities, across the country and around the world.

Quicktake will run an International Women’s Day special today exclusively powered by women, both in front of and behind the camera. From the spirits industry to the gaming world, we will speak to the women breaking barriers and making lasting change in their industries. All guests, hosts and producers will be women in what will be a first of its kind endeavor for Quicktake.

Today at 1 p.m. ET, Cheddar for a special hour-long episode of ChedHer to celebrate International Women’s Day. Featuring roundtable interviews and special guests including Time’s Up CEO Tina Tchen and Pinterest’s head of Content & Creative Partnerships, Aya Kanai, the special will deliver an hour of content dedicated to female representation that recognizes the women who are changing the game.