NEXT:Friday, Jan. 29 Scoreboard: Fox News Is the No. 1 Network in Prime Time, But Rachel Maddow Has No. 1 Show
PREVIOUS:In New PSA, Fox Newsers Ask Viewers to 'Keep Up the Fight' Against Covid-19 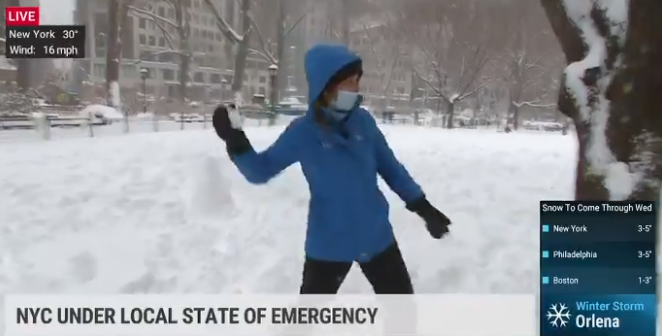 Winter storm Orlena has made its way up through the mid-Atlantic and into the Northeast corridor. Residents of Philadelphia up through Boston are getting hit with more than a foot of snow through Tuesday morning.

The Weather Channel’s Mike Seidel is in Boston, as is Michael Page for TWC. Reynolds Wolf is in Philly.

The Weather Channel’s Jen Carfagno is reporting from New York City. She reported waking up at about 3 a.m ET. on Monday, and there were already 3 or 4 inches on the ground, with more continuing to fall. During her report from New York City’s Flatiron District, she reported six inches at 9 a.m. ET.

“It’s a beautiful scene, but there are a lot of travel issues,” said Carfagno.

As of 1 p.m. ET, National Weather Service in New York City said 13 inches has fallen officially in Central Park. Bruin reported that there was snow actually getting into the George Washington Bridge, the tunnel; meaning there’s a lot of  wind and snow falling in the area.

Travel has been rough all up and down the northeast, and it will only worsen tonight and into tomorrow. In fact, non-essential travel has been restricted in the city through 6 a.m. Tuesday.

If Central Park hits 18 inches (it’s looking increasingly like that will be the case), it would qualify as one of the 10 biggest snowstorms in the city’s history.

Carfagno did manage to make a new friend at Madison Square Park on Monday.

Good morning to @JenCarfagno and Benny the dog ONLY. #Orlena pic.twitter.com/BGpUPorORr

She also encountered snowball fights and even a snowman village in the big city:

And of course it’s not a true New York City live shot without a rat running around:

Yo, @JenCarfagno! Looks like a lil rat made its way into your shot! New York gonna New York! 🐀 @weatherchannel #Orlena pic.twitter.com/tTDoZPTgD6

TWC meteorologist Chris Bruin is also in New York City, up by Columbus Circle. Here’s what he was seeing up at around 10:15 a.m. ET:

Quite the scene here in New York City. Plows are working overtime and still having trouble keeping up with the snowfall! @weatherchannel #WinterStormOrlena pic.twitter.com/SLja6Dza7F

And an hour later, appears conditions are worsening: