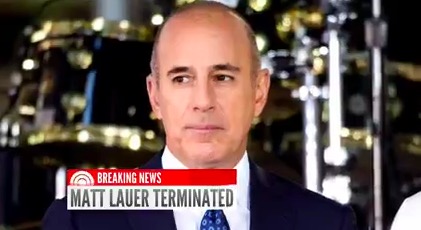 NBC’s Today show, where Matt Lauer spent the last 20 years as co-anchor, led with the news that Lauer had been fired overnight.

In a note to staffers just before the show came on the air, NBC News chairman Andy Lack said the news organization would handle the dismissal “in as transparent a manner as we can.”

Here’s how Savannah Guthrie and Hoda Kotb reported the news:

NBC News' @SavannahGuthrie announces that her co-host @MLauer had been fired after 20 years for sexual misconduct
MT @TODAYshow: pic.twitter.com/i8tSpGvHQU https://t.co/4liXQMydke

Other TV networks quickly jumped on the news. Maria Bartiromo reported it on FBN even before the Today show at 6:57 a.m.. Bloomberg’s David Westin reported the news at 7:01 a.m. “We just flipped on the Today show and Matt Lauer was canned. This was shocking to me,” said the crew of Comcast Sports Net’s Mid-Atlantic morning show.