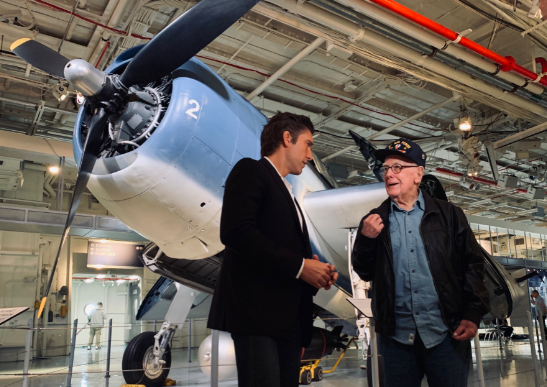 ABC, NBC and CBS are marking the 75th anniversary of D-Day with special programming all week.

ABC World News Tonight anchor David Muir is presenting Return To Normandy, a week-long series from ABC News documenting the journey for six World War II veterans from all over the country who are traveling back to Normandy. The reports include interviews with veterans from Tennessee, California, Alabama, Florida and Nevada.

“It’s an honor to spend time with these World War II veterans including Harold Himmelsbach who told me on the morning of D-Day, before the sun came up, he saw things very few people will ever see,” Muir told TVNewser. “And he said his hope for America is that we not forget, which is why we’re going.”

The series will air this evening on World News Tonight and on a special edition of Nightline on Thursday. Muir will also file reports for GMA and ABC News Digital on the D-Day anniversary later this week.

Muir will anchor World News Tonight from London tomorrow, June 4 and from Normandy, France on Wednesday and Thursday.

Lester Holt will anchor NBC Nightly News from Normandy on Wednesday and Thursday as well. NBC News’ special coverage is called D-Day at 75: A Celebration of Heroes.

On Wednesday– Nightly News will feature interview with D-Day veterans: Tom Rice (97-years old), who was among the oldest of the 18 paratroopers on board the C-47 military transport plane on D-Day; and Eugene Deibler (94-years old), who landed in Normandy five hours before the main seaborne landings behind Utah Beach, and is returning to Normandy for the first time since. Holt will also visit the Airborne Museum in Sainte Marie Egilse, the town that was liberated 75 years ago, and speak with the museum director.

On Thursday – the newscast will feature interviews with students from Chapel Hill, N.C. who raised money to send WWII vets back to Normandy for the anniversary.  Additionally, Holt will present a special piece on the legacy of the Greatest Generation, including additional interviews with vets.

Tom Brokaw will also contribute to NBC News D-Day coverage, appearing on MSNBC’s Morning Joe Wednesday and Thursday, Thursday on Today show, and Thursday on Nightly News. Brokaw first went to Normandy for the 40th anniversary and now this will be his fifth assignment reporting from the region. He’s also the author of the bestseller, The Greatest Generation.

CBS This Morning co-host Anthony Mason will lead CBS News’ coverage of D-Day from Normandy. Mason will be on double-duty, anchoring CTM and CBS Evening News on Wednesday and Thursday. A team of CBS News correspondents, including Mark Phillips, Paula Reid and Ben Tracy, will report from the field with additional coverage and interviews with D-Day veterans. Gayle King, Tony Dokoupil and Dana Jacobson will anchor from New York.

CBS News correspondent Ben Tracy is traveling with President Trump and will have the latest on his trip. CBS News correspondent David Martin gets access to unseen correspondence between two 20th century giants – Winston Churchill and Franklin D. Roosevelt –  that details their plans for the D-Day invasion. Mason will look back at the blow-by-blow coverage from CBS radio correspondents positioned in Europe during WWII. Mark Phillips will feature 97-year-old paratrooper Tom Rice, who jumped onto the beach 75 years ago and saw many of his fellow soldiers killed. He jumps again to commemorate the anniversary. Phillips will also profile Charles Shay, a medic who helped revive and treat soldiers during the invasion. He has since moved to Normandy to live out his remaining days and his participating in the ceremonies.

ABC News will have coverage of the D-Day anniversary and feature stories on ABCNews.com and ABC News Live, the 24/7 breaking news and live events streaming channel available on the ABCNews.com website and apps, as well as Hulu Live, The Roku Channel, Apple TV, Amazon FireTV and Facebook Watch and “On Location” for Facebook Watch. ABC News Live coverage begins Thursday at 5:00 a.m. ET.

Fox News will present special coverage surrounding the 75th anniversary of D-Day throughout the week live from Normandy and Paris.

Tonight at 7 p.m. ET, Martha MacCallum will anchor The Story live from Normandy, featuring an interview with Tom Rice, the 97 year-old World War II paratrooper who will discuss his jump on the historic day.

Fox & Friends will present an interview with World War II Tuskegee Airman pilot Lieutenant Colonel Harry T. Stewart Jr. who will recount his experience in the war and his new book Soaring to Glory.

At 10 p.m. ET, Laura Ingraham will present an exclusive interview with President Trump where he will discuss the 75th anniversary of D-Day, his state visit to the U.K. and other news of the day.