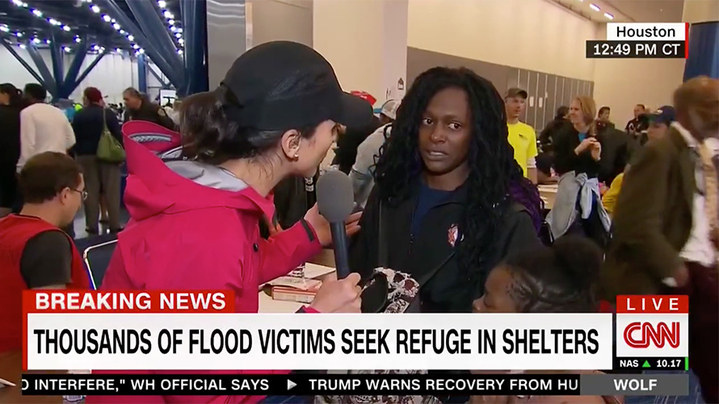 Just before 2 p.m. ET, CNN correspondent Rosa Flores was interviewing a woman who, along with her children, had waited days to be rescued from Harvey’s rising waters in Houston.

“We had been there five days with no food, no lights, and nobody came. Nobody came,” the woman said.

“We heard of stories of mothers trying to save their children from the rushing waters,” Flores said in a follow up question. Can you tell us how that was for you?”

“We walked through four feet of water to get them food on the first day. Yeah. that’s a lot of shit,” the woman said, then taking her frustration out on Flores.

You all are sitting here trying to interview people at their worst times. That’s not the smartest thing to do. People are really breaking down and you’re sitting here with cameras and microphones trying to ask us what the fuck is wrong with us. And you really trying to understand, with the microphone still in my face, when he’s shivering cold, and my kids wet and you still putting the microphone in my face.

“It sounds like you’ve got a very upset family there. We’re going to take a break from that and we’ll get back to you later on,” said Acosta cutting to a commercial

After the break, Acosta and Flores talked about it.

“I think it just symbolizes what we see so many times from people who are hard hit,” said Acosta “I was in Katrina 12 years ago and we see people at their breaking points.”

“We’ve seen a lot of pain, a lot of trauma, a lot of shock here, and that’s exactly what that woman is going through,” said Flores. “It’s a very painful time. I‘ve talked to other people here who have described being on a boat being rescued, but seeing other people hanging on to branches. And because their boat is full they can’t help them. It’s really, really tough for all of these people.”