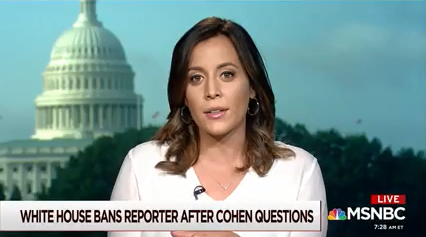 According to the White House, Collins was not allowed to cover the event—featuring Jean-Claude Juncker, the president of the European Commission—because she shouted “inappropriate” questions at the president during an Oval Office photo op earlier in the day. At least that’s what the White House comms department is saying.

“Any reputable journalist in her place would have done exactly the same thing,” Jackson told Morning Joe’s Willie Geist. “I certainly would have. Anybody that I know here at NBC would have asked those same questions too.”

The bottom line is this is almost unprecedented. It is inexcusable for the White House to make this move. It won’t be tolerated by members of the White House press corps I will tell you that. The White House Correspondents Association is not happy, saying this will not stand. The Chief White House correspondent for NBC, this is not a good situation to be in. It is not okay and we’ve made that clear.

“Not only was Kaitlyn Collins well within her rights to ask those questions, but as you say, you’ve been there, you’ve done that before … the president often enjoys that exchange,” added Geist. “So it’s an outrageous display by the White House.”

A member of the press shouting questions in the direction of the president is nothing new, so the White House’s decision to bar Collins from covering another event later that day was a curious one, to put it mildly.

In addition to CNN, the White House communications department has come under fire from journalists employed by other news organizations over the past 18 hours. Some of the critics hail from the news division at Fox News. Bret Baier, Jay Wallace and Martha MacCallum slammed the White House’s move, defended Collins and stood in solidarity with CNN yesterday evening.