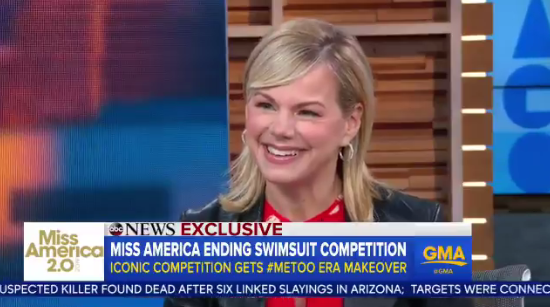 Miss America 1989 Gretchen Carlson was named Miss America Organization chairwoman on January 1, and the former Fox Newser’s first big move in the role was to remove the swimsuit and evening gown portions of the event.

Carlson appeared on GMA this morning (ABC has live broadcast rights to the event on September 9) and told GMA news anchor Amy Robach, “We are no longer a pageant; we are a competition. We will no longer judge our candidates on their outward physical appearance; that’s huge and that means we will no longer have a swimsuit competition.”

Robach (a former Miss America participant herself) asked Carlson about potential ratings hit that could result from removing the “looks” portions of the event.

“That’s actually not a highly rated part of the competition,” Carlson responded. “People actually like the talent part of the competition.” She then pivoted to talking about the all-female composition of the board, including the organization’s new CEO, how Miss America is a non-profit, thanked Atlantic City (the host city) and acknowledged that “change is difficult, but I know a lot about change, and it works in mysterious ways.”

Carlson has more recently been an outspoken advocate for victims of sexual harassment and a high-profile champion of #MeToo.

“I could have never expected what would happen when I sued my former employer at Fox News for sexual harassment 22 months ago, but look what has happened,” she told Robach when asked to comment on her role within the movement. “Thousands of women have been inspired to know that they can stand up and speak up and their voices will be heard…If I’ve been a beacon of hope to any woman in that process, it has been worth it.”

Carlson’s back story when it comes to facing sexual harassment is well-documented. In July 2016, she sued late Fox  News CEO Roger Ailes for sexual harassment, and Ailes resigned from Fox News two weeks after the lawsuit was filed. Carlson would earn a $20 million settlement and a public apology from 21CF in September 2016.

JUST IN: “We will no longer judge our candidates on their outward physical appearance. That’s huge. And that means we will no longer have a swimsuit competition.” – @GretchenCarlson on the major changes coming to @MissAmericaOrg https://t.co/ICRIsRN71h pic.twitter.com/IWKcVvCC50