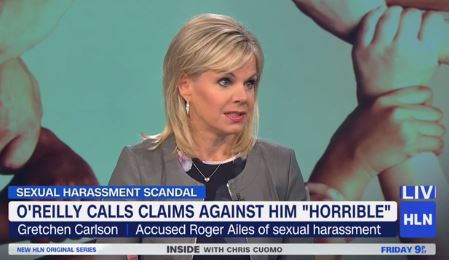 As she continues on her book tour, former Fox News Gretchen Carlson joined Carol Costello on her HLN show today.

Carlson’s sexual harassment suit against Fox News co-founder Roger Ailes in July 2016 set in motion a domino affect that has led to more than a dozen lawsuits, the revelation of tens of millions of dollars in settlements, and it has cost the jobs of top executives and show hosts.

Carlson is the author of Be Fierce described as “a manifesto about how women can protect themselves from sexual harassment in the workplace.”

.@GretchenCarlson on #OReilly: “Nobody pays $32 million to anyone for false allegations.” https://t.co/m4e6t38rd1