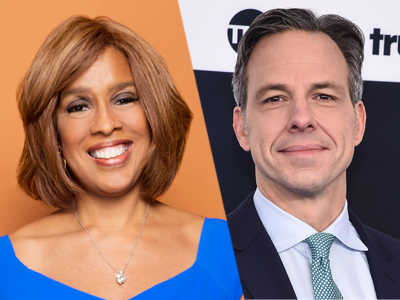 The 2018 Alfred I. duPont-Columbia University Awards, considered by most to be the highest honor in electronic journalism, were announced last night by the Columbia Journalism School.

CBS News’s Gayle King and CNN’s Jake Tapper will co-host the ceremony, which will be held at Columbia University on January 16, 2018.

King’s network will receive two awards for reports broadcast on 60 Minutes (“The New Cold War” from David Martin) and on the CBS Evening News (“The Road to Aleppo” from Elizabeth Palmer).

PBS will win two awards as well, one of which will go to Frontline for its documentary Exodus, which traces the route of refugees into Europe.

ABC News will win a 2018 duPont award as well. The network partnered with Hollywood producer, John Ridley to create a documentary spotlighting the racial divide in LA –  Let It Fall: Los Angeles 1982-1992, which was released first theatrically and then broadcast. Ridley and ABC are no strangers to one another. Ridley was the original producer of the ABC broadcast series American Crime.

While a total of ten video awards will go to traditional outlets — three broadcast networks and five local stations — duPont will also honor Netflix and filmmaker Ava DuVernay for the feature-length doc, 13th.

“At a challenging time for the news media,” said jury chair Cheryl Gould, “we were gratified to see both new platforms strengthen their journalism muscles, and traditional outlets maintain their vigorous reporting standards.”

A relentless investigative series exposed an audacious group of litigators who exploited the Americans with Disabilities Act for profit.

Artfully told and deeply reported, this documentary reconstructed the decade-long series of events leading up to the 1992 racially charged Los Angeles riots.

In this sobering two-part series, producers gained rare access to America’s nuclear arsenal and introduced viewers to the frontline men and women who would have to carry out a nuclear attack.

The Road to Aleppo

A series of courageous daily news reports by veteran conflict reporter Elizabeth Palmer and her crew on the ground in Syria.

In this epic feature-length documentary, refugees fleeing war-torn homelands and desperate poverty worked with filmmakers to tell their own stories.

The Lords of the Rings

This ambitious investigative report—filmed in nine countries—exposed graft and corruption in the IOC and detailed how its members pursue wealth, privilege and self-glory at the expense of the Games.

This innovative long-form report, based on a four month-investigation of the Houston PD’s $8 million body camera program, revealed its many weaknesses, including hundreds of cases with missing footage, major delays in releasing videos, and a general lack of accountability.

Hell on Earth: The Fall of Syria and the Rise of ISIS

Pulled from nearly 1,000 hours of gripping footage, this important documentary explored the root causes and repercussions of the war in Syria, detailing the West’s role in the creation of ISIS.

An impactful two year-long investigative series chronicled the misuse of school police officers to discipline students, which can leave children with criminal records for what is arguably ‘childish misbehavior.’

This powerful documentary from director Ava DuVernay examined how for over 150 years, the American political and legal system has targeted and labeled African-Americans as criminals.

One of the signature achievements in podcasting this year, “The Daily” gives listeners a seat at the table with Times reporters, raising the journalistic bar and inspiring a wave of imitators.

Reveal from The Center for Investigative Reporting and Coda Story

In this courageous radio documentary, Reveal and Coda Story teamed up to shed new light on the dangers of Russia’s anti-gay movement, and exposed its cynical motives.

Episode 600: Will I Know Anyone At This Party? Act One: Party in the USA

In a tumultuous election year, producer Zoe Chace traveled to Minnesota to report on immigration push back, in this firsthand account of the changes taking place in America today.

Men on the Margin

WITI bravely challenged public opinion about some of the most reviled people in American society: convicted child sex offenders, who are paradoxically more prone to re-offend as a result of the laws intended to safeguard children.