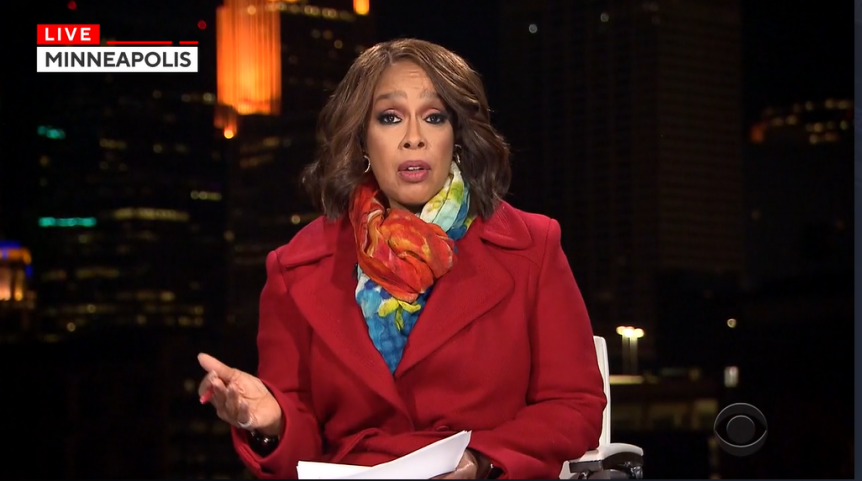 Gayle King has been all over Minneapolis following the George Floyd and Derek Chauvin murder trial stories as closely as any national news anchor. She was the only broadcast network anchor to be on-site in Minnesota, reporting from the City of Lakes for CBS This Morning, co-leading the CBS News Special Report with Norah O’Donnell, and then leading a CBS prime time special with O’Donnell in the Tuesday 10 p.m. hour, which looked at the impact of the case on policing and what George Floyd’s death means for the country going forward.

“When the verdict was read… we started hearing horns honking,” King told O’Donnell during the network’s special report Tuesday. “I think you felt jaws dropping. I think people thought maybe you would get one, but to get all three I think is a very stunning thing.”

She added: It’s one of those things you dropped whatever you were doing. We just received word, we rushed over and here we are.. As we wait to hear the verdict, I can tell you this, the atmosphere in Minneapolis is very intense but I can also say it’s very hopeful.”

“Guilty, guilty, guilty”: @NorahODonnell and @GayleKing react to the verdict in the Derek Chauvin trial, which found the former Minneapolis police officer guilty of all charges for George Floyd’s death https://t.co/FujjaDPld8 pic.twitter.com/jaZ68sDGd0

King opened the prime time special: “I’m sure there are some people who may not be happy about the verdict, but I’ve been out and about, and I’ve had black people, white people, people of all ages coming up to me and saying, ‘we are so relieved and we so agree with this verdict. Justice has been served.’

“All I had in my head was, ‘Man, this is not just for George. This is for everybody around the world.’” pic.twitter.com/OQH5dTk00W

Here’s a piece she did for CTM Wednesday:

Shortly before the Chauvin verdict was announced, hundreds of people gathered at the site where George Floyd was murdered — known as #GeorgeFloydSquare.@GayleKing visited the memorial before the verdict and spoke with the site’s caretaker, Jeanelle Austin. pic.twitter.com/3gudlSDEjm

Additionally, Philonise Floyd and Crump made the rounds on morning TV Wednesday, which included a second interview with King, who beamed in from Minneapolis.

Not your typical start to the work week, and King admitted as much with her colleagues this morning:

“One of things I always say about the job we get to do is that we have a front row seat to history & I’m so glad, really I can’t even tell you, how happy I am to be here in Minneapolis where we can see with our own eyes how people reacted to this verdict yesterday.” — @GayleKing pic.twitter.com/qsWQL1ZJtA