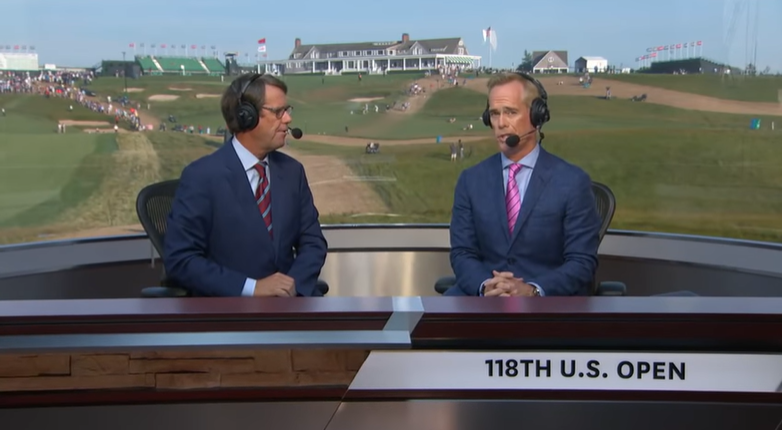 Some big news coming out of the sports media world: Fox Sports has reportedly asked out of the remainder of its 12-year, $1.2 billion TV deal with the United States Golf Association, with NBC set to air the rescheduled men’s U.S. Open in September. Both New York Post media writer Andrew Marchand and Associated Press golf writer Doug Ferguson were on the news.

The U.S. Open is returning to NBC starting this year at Winged Foot after Fox Sports has asked to end its 12-year contract with the USGA, multiple people told The Associated Press on Sunday night.

Three people with direct knowledge of the change say it came together in the last two weeks. They spoke on condition of anonymity because the deal has not been announced.

An announcement was expected Monday.

Not only will NBC air the U.S. Open this year, which was moved to September due to the Covid-19 pandemic, but the AP reports that NBC Sports will likely pick up the final seven years of Fox Sports’ contract with the USGA through 2026.

What does this mean? Well, in addition to the men’s U.S. Open (beginning in September), NBCUniversal already has U.S. broadcast rights to the Open Championship (British Open), along with three World Golf Championships, the Ryder Cup, the Presidents Cup and the FedEx Cup playoffs every other year. NBC and Golf Channel (another Comcast-owned network) also will have all the majors on the LPGA Tour and PGA Tour Champions. In addition to the men’s U.S. Open, Fox held the rights to the women’s U.S. Open and myriad amateur championship tournaments. All of this solidifies NBC as the dominant media player in the world of golf.

Fox’s interest in golf surprised some when it struck a deal with the USGA in 2013, but to the surprise of no one, it went big and bold from the outset. Although coverage of its first U.S. Open was widely panned, it gradually improved and went on to earn critical acclaim over the past few years. As the sports media coverage site Awful Announcing notes, Fox Sports showed a commitment to shot tracer technology, as well as the addition of microphones, highlighting architectural points, and bringing men’s and women’s amateur golf to a wider audience—something traditional golf broadcasters NBC and CBS will hopefully build on.

The voice of Fox Sports, Joe Buck echoed that sentiment, giving a shout out to the network’s production team:

Nantz, Hicks, Tirico all better at calling golf than me -but I would put our production up against anybody’s. Our innovation and drone shots and overall effort to try new things pushed golf coverage forward and for that I am most proud.Our producer Mark Loomis was a master tutor