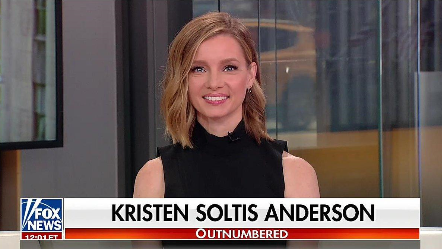 Anderson has been signed by Fox News to a contributor role, where she will offer political analysis across FNC’s daytime and prime time programming as well as Fox News Sunday with Chris Wallace. Anderson, recently an ABC News political analyst, made her first appearance as a Fox Newser today on the network’s midday panel show Outnumbered.

Anderson is the co-founder of Echelon Insights, an opinion research and analytics firm that serves brands, trades, nonprofits, and political clients. Through her work at Echelon, she regularly advises corporate and government leaders on polling and messaging strategy, and is considered one of the foremost polling experts when it comes to millennials.

Anderson participated in ABC News’ election night coverage in 2016. She regularly appeared on a variety of political programming, including Morning Joe, The Lead with Jake Tapper and HBO’s Real Time with Bill Maher.

In addition to her role on FNC, Anderson will continue to host SiriusXM’s The Trendline with Kristen Soltis Anderson, airing weekly on their POTUS politics channel. Anderson, who leans conservative, will also maintain her role as co-host of the bipartisan weekly podcast, The Pollsters, also featuring Democratic pollster Margie Omero.