NEXT:Howie Mandel on What to Expect When Deal or No Deal Returns to CNBC
PREVIOUS:Sunday Show Ratings: May 13 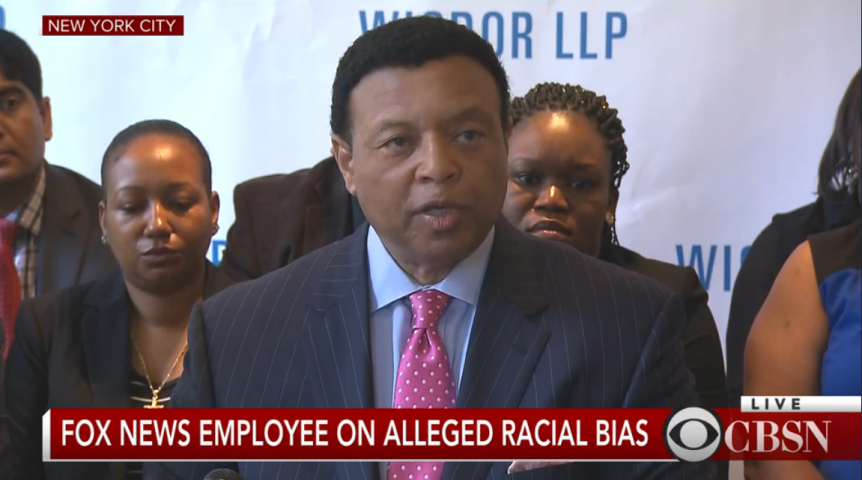 First reported by Emily Steel of the New York Times, the settlements reached by 21CF include the racial discrimination lawsuit filed in April 2017 by anchor Kelly Wright and employees in Fox News’s accounting department. Their suit noted repeated complaints about “abhorrent, intolerable, unlawful and hostile racial discrimination” to network execs but that no action was taken and that vulgar behavior continued.

None of the lawsuits included in the settlement had to do with sexual harassment allegations.

A source told TVNewser the $10 million includes contractual buyouts. According to the Times, the $10 figure is far less than the $60 million Wigdor had proposed last summer, a figure that Fox had declined.

The veteran anchor spoke out about racial discrimination at Fox News in April 2017 during a press conference that was organized by his attorney Douglas Wigdor of Wigdor LLP.

“This hurts,” began Wright, “I am here reluctantly because I am not against any man or woman at Fox News. The truth is that I admire, I like and even love the people I work with and for. But I don’t like what they do.”

“There is systemic and institutional racial bias,” Wright continued. “And so when my colleagues from other departments began to reveal their encounters with blatant acts of discrimination in their departments, I watched it. I prayed about it. I cried over it, and I said I could no longer sit in silence, collect my paycheck, and act like I didn’t experience racial bias on my own level as an on-air personality.”

Fox News has now settled all but a tiny fraction of lawsuits filed against its parent company as 21CF continues on its quest to earn UK regulatory approval to acquire Sky Broadcasting, and o close the upcoming merger with Disney.

By the end of last June, 21st Century Fox had about $50 million in costs in the previous year that were tied to the settlement of sexual harassment and discrimination allegations at Fox News.

This all started with the July 2016 sexual harassment lawsuit filed by former Fox News anchor Gretchen Carlson. She settled for $20 million and got a public apology from the company. The suit led to the departure of Ailes shortly after. Then there was O’Reilly, who was ousted in April 2017 as a result of numerous sexual harassment allegations eventually led to an advertiser boycott.