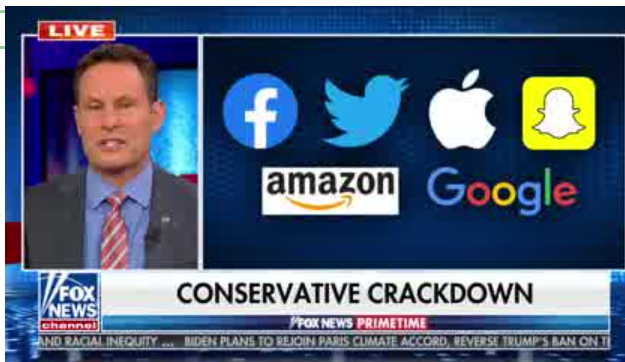 Fox News announced last week that its 7 p.m. news show The Story with Martha MacCallum would be moved to 3 p.m., and that 7 p.m. would become an opinion hour.

The new opinion hour, currently named Fox News Primetime, launched on Monday, with Brian Kilmeade as host. The longtime Fox & Friends co-host is one of a number of rotating hosts who will helm the hour for one week until a permanent host is named at a later date.

The LA Times’ Steve Battaglio first reported on Monday that other rotating hosts in addition to Kilmeade will be Fox News contributors Katie Pavlich, Rachel Campos-Duffy, and Trey Gowdy, as well as Mark Steyn (who often fills in for Tucker Carlson at 8 p.m.).

Maria Bartiromo will also fill in at 7 p.m, according to the Times. The veteran TV business journalist who hosts shows on Fox News and FBN, has come under fire in recent months for bringing controversial guests on her show such as Trump lawyers Sidney Powell and Rudy Giuliani, two of the highest profile figures advancing conspiracy theories post election.

Despite the criticism, Bartiromo has defended her show and her commentary recently, telling the LA Times right before Christmas: “This is the sitting president of the United States, and his attorneys, which up until recently included Powell, have a right for their side to be heard and state their case.”

The 7 p.m. hour has become an unexpected issue for the network in recent months. The Story with Martha MacCallum was the No. 1 cable news show at 7 p.m. for the full calendar year. but the show had been struggling to draw viewers since the 2020 presidential election, often coming up short to CNN and MSNBC in the slot. That’s a stunning turn of events for a network that over the past 20 years has traditionally dominated its competition in most hours of the day, including 7 p.m. CNN has benefited from a scorching hot news cycle. MSNBC has benefited from its viewers being excited about a new Democratic administration, while a segment of Fox News viewers are still upset about the network’s election night coverage, which was fronted by MacCallum and Bret Baier, whose 6 p.m. newscast has also taken a post-election ratings tumble.

Now, the network did discuss making changes to the 7 p.m. time slot prior to the election, saying in October, “Fox News Media regularly considers programming changes, including to its daytime lineup, and will launch new formats as appropriate after the election. These changes are being made independent of any other ongoing matter.” However, these consistent third place finishes at 7 p.m. and during the daytime hours, which also feature news programs, may have expedited the change from news to opinion.

This change in tone—news to opinion—will likely lift the network out of its ratings rut. Enough to move back into first place? That remains to be seen.