NEXT:Jeff Zucker: 'The NYPD Has Concluded Its Security Sweep, and It Is Now Safe to Return to the Building'
PREVIOUS:Scoreboard: Tuesday, Oct. 23 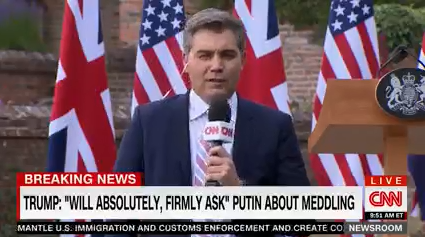 Fox News is taking extra precautions on the security front, in response to this morning’s news that a suspicious package containing an explosive device addressed to Time Warner Center/CNN was received in CNN’s mailroom.

The network is also showing support for its fiercest competitor. 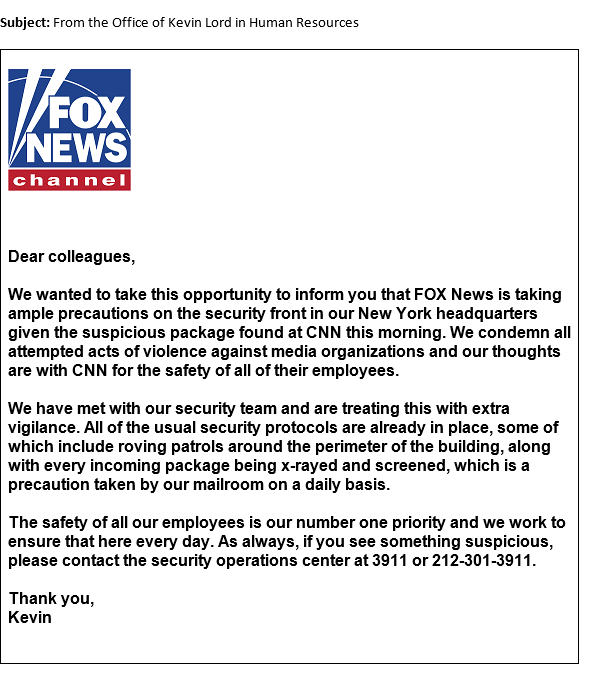 It’s a kind gesture. But this sentence from Lord—”We condemn all attempted acts of violence against media organizations and our thoughts are with CNN for the safety of all of their employees.”—is worth keeping an eye on this evening.

President Trump is holding a rally tonight in Wisconsin, and it’s likely the crowd will at some point break out into a “CNN Sucks!” chant, as has been par for the course at the president’s rallies. Will Fox News’ hosts condemn the chants, in light of today’s events and Lord’s statement about them? Will they defend a figure like Jim Acosta, the CNN chief White House correspondent who has been the subject of taunts–some minor, some not-so-minor– at Trump rallies?

It’s definitely possible. After all, Fox Business anchor Trish Regan stood up for Acosta earlier this year, and called for “civility.”

We’ll soon see what happens on that front, and also if CNN decides to televise tonight’s rally.