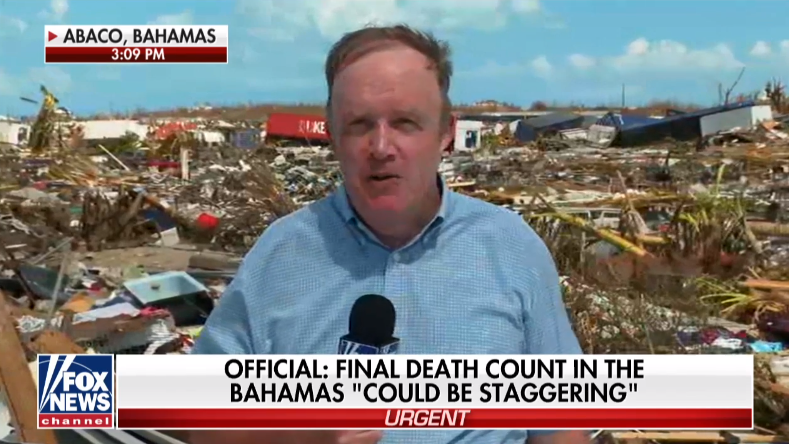 Hurricane Dorian has killed at least 30 people in the Bahamas since it ran roughshod over the nation as a Category 5 storm on Sunday afternoon. Joy Jibrilu, the director general of the nation’s tourism and aviation ministry, said earlier today that “literally hundreds, up to thousands, of people are still missing.”

Fox News’ Miami-based correspondent Steve Harrigan was originally stationed in Florida for his network’s coverage of Dorian, but moved to Bahamas on Wednesday to report on the aid efforts.

After spending Wednesday and Thursday in Nassau, Harrigan, a one-time foreign correspondent for Fox News, moved to Great Abaco Island, which has been destroyed.

We managed to catch up with the Fox Newser Friday afternoon, not long after he filed a live report for Shepard Smith Reporting.

“People on Abaco Island see the camera and come over to tell their stories,” Harrigan told us. “One man’s wife died in the storm. One man swam to safety holding his children. The stories are hard to hear.”

Harrigan also said he has been noticing police walking through the wreckage looking for dead bodies. All had surgical masks on. Some had gloves, and one even carried a machete.

Then, there’s the smell of the dead bodies.

“A mass of dead bodies has a unique smell,” said Harrigan. “I smelled it in Rwanda and Haiti. We found the bodies easily by smell.”

Harrigan said that smell led he and his photographer Chris Pontius to the interior of a Baptist church. Once there, they came across bodies of people who had probably taken shelter inside the church during the storm, but then succumbed to their deaths when the cement blocks fell due to the winds.

“We shot standups. Some showed the bodies, some did not,” said Harrigan.

It has not been an easy time for the Fox News correspondent and his team. The mass of dead bodies is awful in its own right, but the job itself is tough with communication at such a premium.

“With no cell phone service we used a BGAN to do live shots,” said Harrigan. “I stood on the foundation of what once was a house in what once was a neighborhood. You could look left and right and everything was gone. One strappy shoe near my feet. A rusted circular saw. A dime. Eight toilets.”