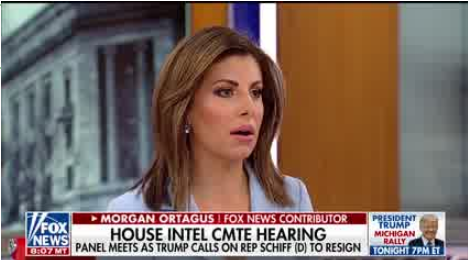 Another Fox Newser may be heading to the Trump White House.

If the report is accurate, Ortagus will bring a bit more experience to this role than her predecessor. According to the bio on Go Advisors –a company she co-founded with current CNN national security analyst Sam Vinograd– Ortagus had served as a public affairs officer for the U.S. Agency for International Development, an independent agency that takes direction from the State Department. Her work included time in Iraq.

Ortagus had also worked for the Treasury Department in the first term of the Obama administration as an intelligence analyst from 2008 – 2010, and as Treasury’s deputy U.S. attaché to Saudi Arabia in 2010.

She is an active U.S. Naval Reserve Officer.

On the TV news front– Ortagus is an active Fox News contributor. Her most recent FNC appearance was on America’s Newsroom today during the 10 a.m. ET hour. She appeared on Special Report with Bret Baier last night, The Five on Tuesday, and Outnumbered last Friday.

She has published 11K tweets and has 32.5K followers, as of Thursday afternoon.

Ortagus would replace Heather Nauert, who served as State Departent spokesperson from April 2017 through February 2019. In December 2018, Nauert was nominated by President Trump to become the next U.S. ambassador to the U.N., replacing Nikki Haley. However, Nauert later pulled her bid from consideration in February 2019, and left the administration entirely after reports surfaced that she had employed a nanny who was not legally able to work in the country.

Before taking the State Department role, Nauert had been a Fox News anchor semi-continously since 1998.