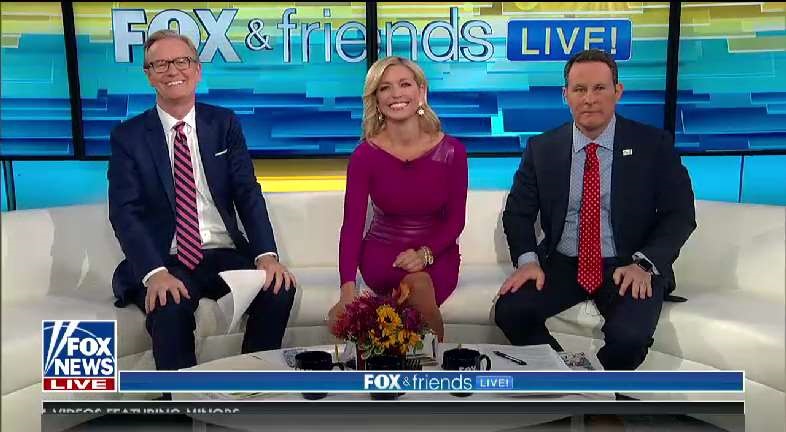 Fox & Friends will have even more friends than usual once a month. The show will include a live studio audience on a monthly basis, starting with this morning’s broadcast, which TVNewser attended.

There were roughly 50 people seated in the audience for the entire three hours, beginning at 6 a.m. Audience members were selected by submitting a form online; the show looks for people “who are passionate about politics” and picked the audience randomly.

The audience was pretty enthusiastic throughout the morning, thrilled to see their TV news heroes–Ainsley Earhardt, Steve Doocy and Brian Kilmeade–up and close and personal on the “curvy couch,” and took plenty of selfies with them during commercial breaks.

“I love the fact that it’s a cross-section of America,” Kilmeade told TVNewser after the broadcast. “It’s not just New York and New Jersey, we’ve got people from Louisiana, from Boston, from Pennsylvania, San Antonio, Texas, and I love talking to them during the breaks.”

The Fox and Friends team has apparently been mulling this idea around for a while, and said it was a collaborative decision by producers.

We asked the hosts what the live dynamic adds to the show.

“You get automatic feedback, which is wonderful because you can see what the audience really wants to talk about, what subjects they like the most,” said Earhardt. “Based on their responses, what they clap for the most and their responses to the questions.”

“Instant feedback,” agreed Kilmeade. “Also, being in front of a live audience just gives the show a different feel.”

Doocy referred to the dynamic as “a live focus group where, as Ainsley said, you start talking about a topic and if the audience is responsive, it’s like ‘OK, let’s keep going with this.’ Because if you go to the second topic, and it’s like, ‘OK, nobody’s making any noise, maybe we miscalculated on this,’ which thankfully has not happened yet; although there were a couple of topics that I heard one studio audience member in the commercial who did not know anything about the topic. We assume everyone is up to speed on things.”

The audience reacted audibly at various points throughout the broadcast. They applauded when someone said something they liked. For instance, when Chris Christie, who came on the show at 8 a.m., remarked, “The Democrats will not win on Socialism, and the American people like what President Trump has done for the country,” the audience broke out in applause.

They booed or groaned when they heard things they didn’t like, including comments pertaining to Democratic Party policy (i.e. the Green New Deal) or a clip from Wednesday’s Michael Cohen testimony.

The audience reacted with a mix of groans and sarcastic laughter when a clip was shown of Cohen during the testimony calling President Trump a “racist” and “con man.” 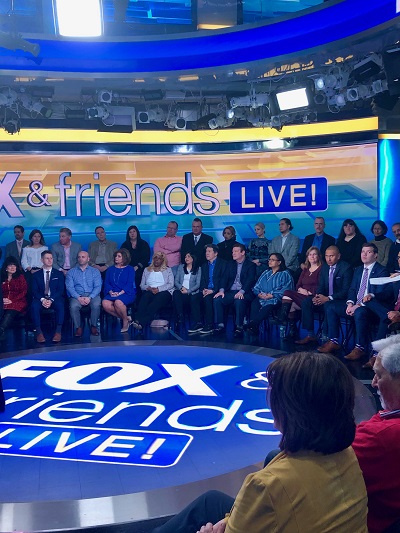 What didn’t necessarily work quite as well was asking policy-related questions of individual audience members. This is something Doocy hinted at, and we noticed it too.

At one point, Earhardt asked a couple of folks about climate change. She brought up the Green New Deal, which is the Democrats’ proposal of stimulus programs meant to address climate change and economic inequality. The audience booed when they heard that phrase, which influenced Earhardt to ask someone why they didn’t like it. One person said he didn’t know enough about it to respond.

Now, granted, this is live TV, and the folks in the audience aren’t professional newscasters, politicians or pundits, but perhaps the program should stick to having their audience be the ones asking the questions, as opposed to answering them.

Having audience members ask questions of talent was a slightly smoother process. During commercial breaks, a producer would go around, and tee up various members of the audience to ask questions. For instance, one man asked Christie about the Mueller investigation. Another asked: “Are we ever going to investigate Hillary Clinton?” to which Christie responded, “We may have missed our window,” which elicited groans from the audience.

“Another thing about the ‘live’ factor is you immediately see that the audience is well-informed, generally,” Doocy remarked. “Because if they’re going to a cable news show to watch the news, they know the news.” 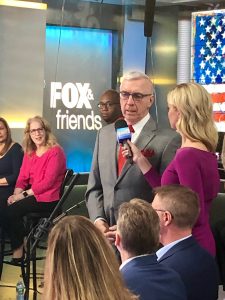 Lara Trump made a pitstop on the curvy courch from 8:20-8:30 a.m. She was treated like a celebrity by the audience, and happily posed for selfies before and after her appearance. 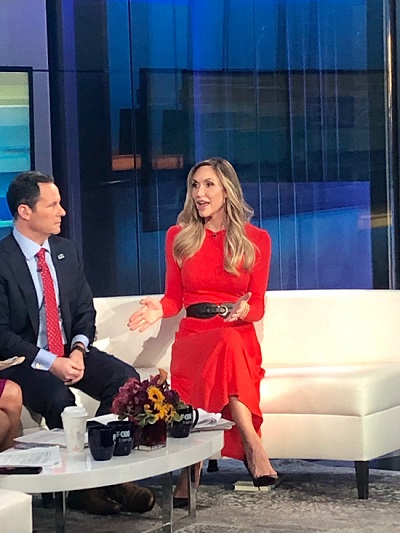 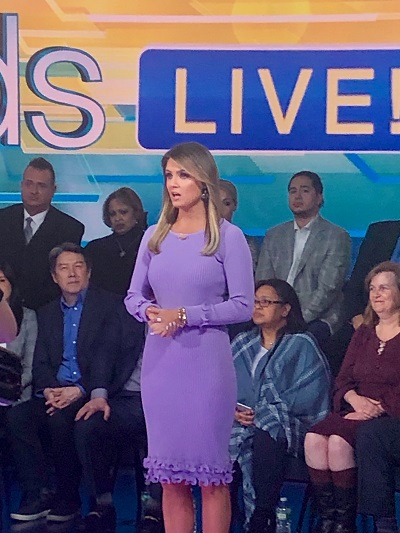 Jesse Watters stopped by towards the end of the show. In addition to taking a few shots at Democrats, Watters promoted this coming Saturday’s episode of Watters World, remarking that he’ll have a Trump and chairman Kim impersonator on the show.

Janice Dean and Tom Shillue came by towards the end of the show as well, to play “Famous Kims,” a trivia game about people and objects the share that first name.

The Fox & Friends fans who were able to be in the studio audience seemed to enjoy their experience as the show’s inaugural live audience. So did Kimeade, who said, “It was just a great time.” 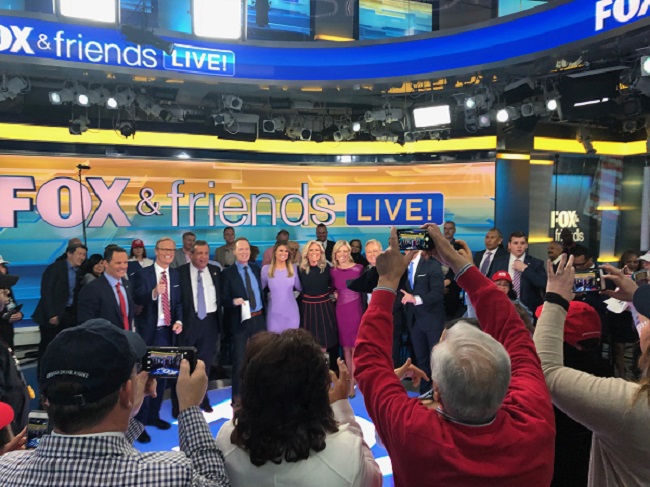