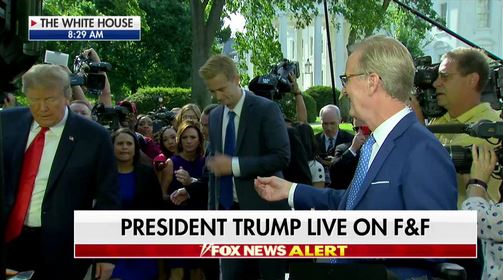 “Wow, the highest rated (by far) morning show, @foxandfriends, is on the Front Lawn of the White House,” tweeted President Trump at 7:50 a.m. this morning. “Maybe I’ll have to take an unannounced trip down to see them?”

And so he did. Just before 8:30 a.m. ET this made-by-the-media president created another made-for-TV moment.

As he walked to Fox News’ White House South Lawn position, a gaggle of reporters including ABC’s Kyra Phillips and CBS’s Weijia Jang asked questions about Michael Cohen, Paul Manafort and immigrant children being separated from their parents at the U.S. border, all as Fox’s Peter Doocy escorted the president to his father, Steve Doocy, waiting at the Fox position.

MOMENTS AGO: @SteveDoocy: “The President of the United States is just outside the press room and it looks as if he is en route to our location.” pic.twitter.com/ZBLI2VOLZb

After his interview with Doocy, Trump had to make his way back to the residence. And the reporters were waiting:

Pres. Trump says he has “a good relationship with Kim Jong Un … I can now call him.”

“People are shocked … they thought Trump was going to get in, he was going to start throwing bombs all over the place. It’s actually the opposite.” https://t.co/HuFC4Li8pT pic.twitter.com/FPY0D6GS2p

Something perfect about Trump attempting to give Fox special treatment on the taxpayers’ lawn and getting swarmed by the free press, blowing the exclusive https://t.co/snfGc2dEs6