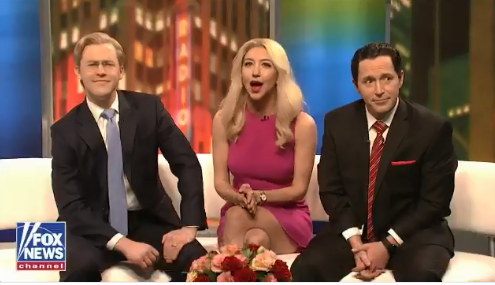 All of a sudden, a certain Fox & Friends superfan called into the program.

It was, of course, Pres. Trump played by Alec Baldwin.

During the call, Trump, who was sitting in bed with a breakfast sandwich, expressed how pleased he was with the memo. “This memo might be the best memo since the Declaration Of Independence,” he said. “I haven’t read either of them.”

He referred to Nunes as his “sweet little house elf,” and expressed his gratitude to Nunes for showing the FBI as being “the most biased agency in the history of time.”

Trump also said he watches Fox & Friends in place of his daily intelligence briefing, and complimented the morning show’s ratings, but assured everyone they’re “not as big as ratings for my State Of The Union speech, which was watched by 10 billion people, including all of China. Now they say there’s only seven billion people on Earth, so where do the other three billion people come from? Illegals? I don’t know.”

And then, this happened: