NEXT:Hannity Says Roy Moore 'Has 24 Hours' to Get His Story Straight Or Get Out of Alabama Senate Race
PREVIOUS:Squawk Box Shows Off New Street-Level Set Overlooking Times Square 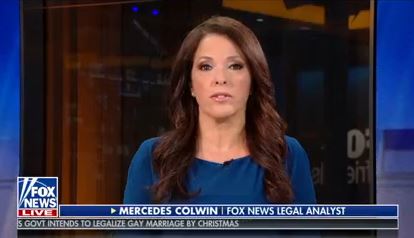 Fox News legal analyst Mercedes Colwin has gone back on the network to explain her controversial comments last week.

Last Thursday on Hannity, Colwin said that for “a lot” of women who sue for sexual harassment “it’s all about money.” She added that actual victims of sexual predators are “few and far between.”

“Last week Fox News legal analyst Mercedes Colwin made remarks on air which she would like to clarify,” said Ainsely Earhardt teeing up the clarification on Fox & Friends this morning. Colwin then stared straight into the camera and read: “I would like to clarify and address comments that were made that do not reflect my values and my beliefs.” Here’s the rest:

Since she made those original comments last Thursday Colwin has stepped down from her role as managing partner in the New York office of Gordon Rees Scully Mansukhani where she will continue to be a partner.

“Contrary to what may have been inferred from what was said during the telecast,” the law firm said in a statement, “the sad reality is that the number of women who likely have not been exposed to such repugnant conduct over the course of their personal or professional lives is, unfortunately, few and far between.”