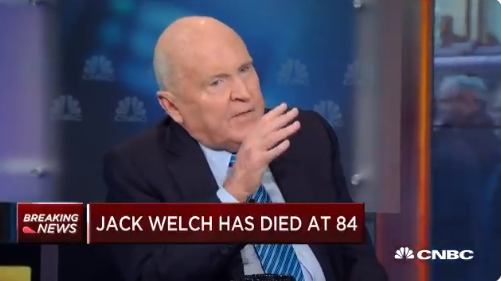 Former General Electric chairman and chief executive Jack Welch died late Sunday at the age of 84. The cause of death was renal failure, his wife said this morning.

In 1999, Fortune referred to Welch as “manager of the century.” However,  he also was known as “Neutron Jack” for slashing roughly 100,000 jobs during his tenure.

“Today is a sad day for the entire GE family,” GE chairman and CEO H. Lawrence Culp Jr. said in a statement this morning. “Jack was larger than life and the heart of GE for half a century. He reshaped the face of our company and the business world.”

Welch was known as a dynamic leader and often made surprise stops at the CNBC newsroom. He would also make countless appearances on TV news over the years, even guest anchoring MSNBC and CNBC programming after he left their parent company just days before Sept. 11.

CNBC-turned-FBN anchor Maria Bartiromo told TVNewser in Jan. 2019 that she considers Welch a mentor. “I learned a lot from Jack Welch in terms of leadership. I remember taking leadership classes at GE, which at the time owned CNBC. I remember one class building essential leadership skills. It was really valuable.”

Bartiromo wrote a Jack Welch obit, posted on FoxBusiness.com not long ago.

Another CNBC-turned-FBN anchor Neil Cavuto also considers Welch a mentor, and spoke about his passing during an appearance this morning on FNC’s America’s Newsroom

Welch was also a friend of Donald Trump‘s. The president tweeted about his passing this morning:

Jack Welch, former Chairman and CEO of GE, a business legend, has died. There was no corporate leader like “neutron” Jack. He was my friend and supporter. We made wonderful deals together. He will never be forgotten. My warmest sympathies to his wonderful wife & family!