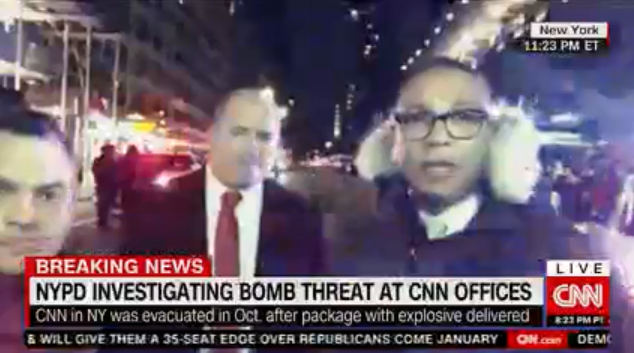 There are people out there who seem to really have it out for CNN, and it’s becoming problematic for those working in the company’s headquarters.

For the second time since October, CNN was forced to evacuated its New York offices at Time Warner Center because off a bomb threat.

The threat was called into Time Warner Center in New York just before 10 p.m. CNN Tonight with Don Lemon was in a commercial break when alarms started going off in the building at 10:26 p.m. ET.

Employees were forced to evacuate the building, and headed out to West 58th Street. CNN briefly showed a replay of AC360 before going live again, this time with CNN International’s John Vause anchoring live coverage from Atlanta.

Vause was able to get Lemon on the phone while the team was making their way to the street. The veteran CNN Tonight anchor would eventually end up hosting the broadcast from the street beginning at around 11:15 p.m. ET, via iPhone and Skype, for the next hour or so.

Lemon was joined by along with crime and justice reporter Shimon Prokupecz and chief media correspondent Brian Stelter (who was originally on to talk about a number of media-related stories that we’ll get to in an upcoming post), reporting live on the NYPD’s efforts to determine whether the threat was real.

The caller claimed there were five bombs in the building, they reported. “It’s terrible because it’s disrupted the way we conduct business and it’s also disrupted the entire neighborhood in this area,” Lemon said. He added, “It’s kind of a repeat situation of what happened back in October and these are the times that we’re living in.” 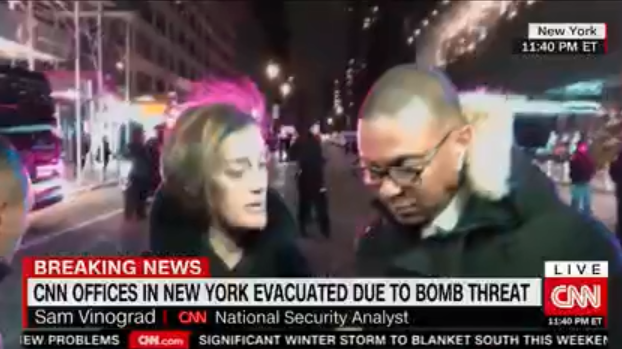 >CNN National security analyst Samantha Vinograd also appeared on the remote broadcast, and said the timing of the bomb threat (which was called in not long after the below tweet from Trump) very likely provoked the threat.

FAKE NEWS – THE ENEMY OF THE PEOPLE!

All of this brought back not-so-great memories of the last bomb threat, back on October 24, although the Time Warner Center actually found a bomb that time which thankfully did not detonate.

As with Lemon, CNN Newsroom anchors Jim Scuitto and Poppy Harlow anchored their broadcast from the street that day, reporting on the news concerning their place of employment.

New York’s Finest eventually determined that it was a false alarm, and gave the all clear for employees to head back into the 55-floor-high Time Warner Center at roughly 11:50 p.m.

About 20 minutes later, Lemon was back to broadcasting from inside CNN studios, moving onto other news through the midnight hour, including Kevin Hart stepping down as host of the Oscars in light of homophobic tweets he sent out nearly a decade ago.