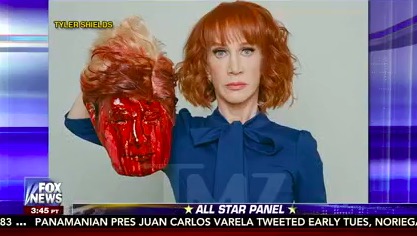 CNN says it will rethink Kathy Griffin‘s participation in its New Year’s Eve special which she has co-hosted with Anderson Cooper for the last 10 years.

This comes after Griffin took part in a photo shoot in which she holds the severed, bloody head of Donald Trump.

“We found what she did disgusting and offensive,” a CNN spokesperson told TVNewser tonight. “We are pleased to see she has apologized and asked that the photos be taken down. We are evaluating New Year’s Eve and have made no decisions at this point.”

Griffin was trending on Twitter for most of the day, but for all the wrong reasons. By 8 p.m. ET tonight she was apologizing for it and asked the photographer, Tyler Shields, to remove the photos. But this being the internet, it’s too late for that.

I am sorry. I went too far. I was wrong. pic.twitter.com/LBKvqf9xFB

Wednesday morning Pres. Trump tweeted that his son Barron was “having a hard time with this. Sick!”

Kathy Griffin should be ashamed of herself. My children, especially my 11 year old son, Barron, are having a hard time with this. Sick!