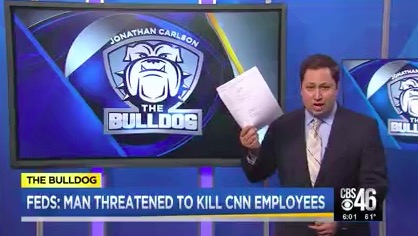 The FBI arrested the man at his home outside Detroit. Among other things, he’s accused of telling a CNN operator he was traveling to Georgia “to f-ing gun every single last one of you.”

Jonathan Carlson, a reporter at Atlanta CBS affiliate WGCL, got his hands on court documents describing the case. During the station’s 6 p.m. newscast, he reported:

“The man told a CNN operator, ‘Fake news. I’m coming to gun you all down.’ Then saying, ‘I’m smarter than you. More powerful than you. I have more guns than you. More manpower. Your cast is about to get gunned down in a matter of hours. I’m coming to Georgia right now to go to the CNN headquarters to f-ing gun every single last one of you.'”

“We take any threats to CNN employees or workplaces, around the world, extremely seriously,” CNN said in a statement tonight. “This one is no exception. We have been in touch with local and federal law enforcement throughout, and have taken all necessary measures to ensure the safety of our people.”