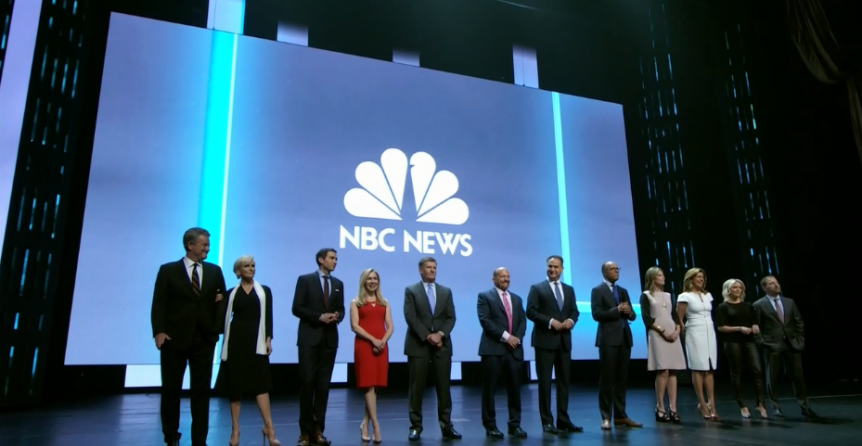 It has been a controversy-filled couple of weeks for NBC News, but that didn’t stop the company’s most recognizable TV news talent from taking the stage in a jam-packed Radio City Music Hall today for the NBCUniversal Upfront.

“No one else has the same scope and breadth of talent as our organization does, and we have the most recognizable faces representing some of the most trusted brands in news,” remarked Holt after a montage of interviews and reports filed by on-air NBC Newsers were shown on the big screen. “It’s the people of NBC News, MSNBC, CNBC and Telemundo, and the passion and humanity they bring to what we do that sets us apart.”

“It’s an unparalleled team of journalists dedicated to original and investigative reporting, insightful analysis and newsmaking interviews, to focusing on the human side of the news, getting it right and making deep connections with our audiences and becoming part of the fabric of their daily lives has enabled Today, Meet the Press, Dateline and NBC Nightly News, as well as CNBC to all be No. 1,” continued Holt.

The Nightly News anchor also remarked that MSNBC “is the No. 2 network in all of cable, and Telemundo is both a choice and a voice and choice of Hispanics across all platforms.” He also noted “new shows like Megyn Kelly’s,” and NBC News’s Snapchat show Stay Tuned.

“Journalism is what we do, and facts do matter,” said Holt.