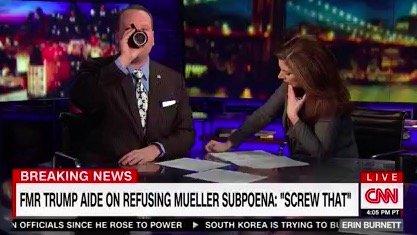 Following his phone interview with MSNBC’s Katy Tur this afternoon–which got coverage on both ABC’s World News Tonight and NBC Nightly News–former Trump campaign aide Sam Nunberg continued to make the news rounds: six interviews the span of four hours, which even surprised him.

Nunberg, who is talking about his refusal to submit to a Special Counsel subpoena, stopped by Rockefeller Center and appeared on set with MSNBC’s Ari Melber before heading to Columbus Circle to appear with Erin Burnett on CNN. He also did an interview with NY1 in which he called Sarah Huckabee Sanders a “fat slob.”

If you’re looking for news, there’s this: Nunberg told Melber that prosecutors offered him immunity.

If you’re looking for a sense of Nunberg’s state of mind, there’s this exchange with Burnett:

Burnett: I reached out to a Trump ally. This person told me–I just want to be direct because he’s not the only one to say it–you’re drunk or off your meds. At least half a dozen other CNN reporters have received similar messages. Is this a hit job or is something wrong?

Nunberg: I don’t care what they say. I really could care less what the Trump White House has to say about me.

That was in the first few minutes of the 37-minute (with commercial breaks) interview. Nunberg’s lawyer, by the way, had no idea he was going to be doing the sit-downs.

Here’s how Burnett wrapped it up:

Burnett: You’re sitting very close to me. We talked earlier about what people in the White House were saying to you, talking about whether you were drinking or on drugs. Talking to you, I have smelled alcohol on your breath.

Nunberg: I have not had a drink.

Nunberg: My answer is no.

Nunberg: No. Besides my meds. Anti-depressants. Is that okay?