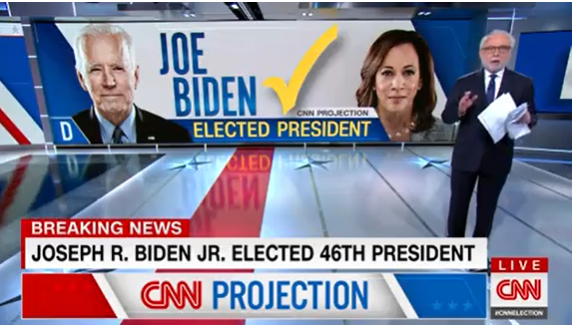 Watch a lot of cable news last week? You weren’t alone. CNN, Fox News and MSNBC each earned their largest average audience in the history of their respective networks.

During the week of the 2020 presidential election, CNN averaged more viewers than any other cable television network.

CNN Digital also had 5 of its 6 most-viewed days of all time.

The decision not to call the 2020 race until Saturday actually helped CNN from a ratings standpoint. There was more interest in the news throughout the week, whereas in 2016, former-Secretary Hillary Clinton conceded in the early hours of Wednesday, thus slowing the news cycle just a tiny bit for the rest of that week and igniting a drop in viewership.

Speaking of Fox News, FNC finished runner up to CNN for the week in the key audience categories and dayparts. However, it was still the top-ranked network on Election Day, Tuesday, Nov. 3, delivering the highest-rated telecast of the week in all of cable for Democracy 2020 special election night coverage (14.1 million viewers, 5 million adults 25-54).

Co-anchored by Bret Baier and Martha MacCallum, FNC’s prime time coverage of election night topped all broadcast and cable nets and set a record for the most-watched election night coverage in cable news history. The network’s special presentation from 6 p.m.-4 a.m. ET delivered 10.1 million viewers and 3.8 million in the demo, topping all networks in total viewers and 25-54. FNC’s telecast was up in prime time in both categories versus 2016 election night broadcast (+16% in total viewer and +10% in 25-54 demo).

Election week 2020 marks Fox News’ most-watched week in total day since the Iraq war in March 2003, and most-watched in the 25-54 demo dating back Hurricane Katrina in August 2005.

Over the course of Election Day, FNC Digital peaked at over 3 million concurrent users, a record across FNC digital properties and doubling Election Day 2016.

FBN averaged 647,000 total viewers and 193,000 adults 25-54 in prime time on election night, which, according to Nielsen, is more than rival CNBC (although CNBC declines to use Nielsen data to measure its viewership).

On Saturday, the speeches of President-elect Joe Biden and Vice President-elect Kamala Harris drew a record 9 million total viewers and 2.5 million A25-54 viewers on MSNBC from 8:28 p.m.-9 p.m., marking the highest-rated program on the network ever.

Saturday, Nov. 7, when the race was called for Biden-Harris, ended up being the most-watched Saturday in MSNBC history and the 2nd highest-rated day ever behind Election Day.

MSNBC may have finished in third place, both on cable news and across basic cable, but it posted by far the most significant amount of viewership growth from election week 2016 out of cable news’ big three. MSNBC was +142% in total prime time viewers and +151% in total day viewership vs. election week 2016, which was a week when the network ranked No. 5 in total prime time viewers and No. 4 in total day viewers.

ESPN came in 4th place this past week, both in total viewers and among adults 25-54 during prime time and total day.