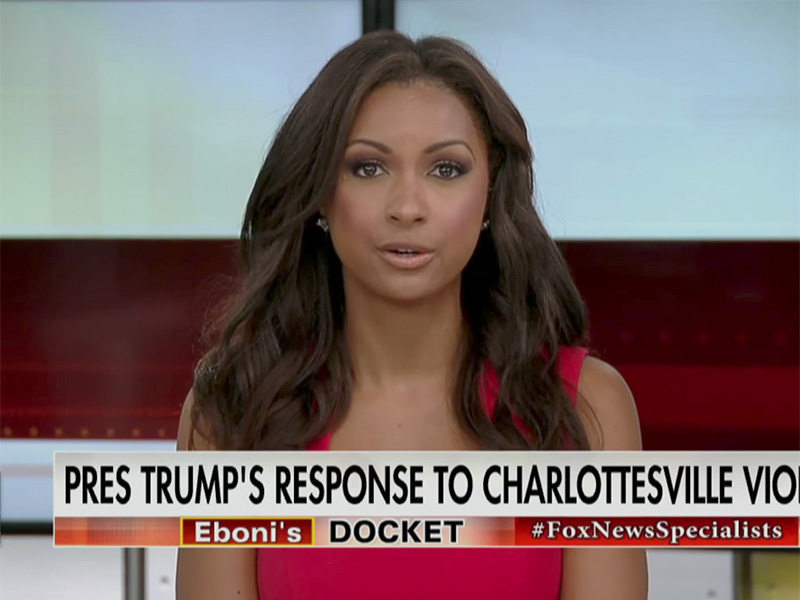 “Mr. President, your initial response was cowardly and dangerous, and they indeed warranted a second statement,” Williams said on-air. Those thoughts led to death threats against her from Fox News viewers.

On Tuesday, an hour before Pres. Trump walked back his comments from Monday, we talked to Williams about her criticism, as well as the current state of The Specialists with co-host Eric Bolling sidelined pending the outcome of a sexual harassment investigation into his conduct. We also talked about the possibility that Laura Ingraham will be joining FNC’s prime time lineup which would likely mean The Five moves back to 5 p.m., where The Specialists currently airs.

TVNewser: You made some pointed comments in response to Pres. Trump’s delayed condemnation of the neo-Nazi protesters who marched on Charlottesville. Many Fox News viewers and some on the far-right seem to be unhappy with you. How are you feeling at the moment?

Williams: Well in light of the rather intense responses, I’m feeling pensive yet really grateful that despite all of the blow back and negative backlash, I have been able to speak my truth and hopefully engage in a way that will be productive. I think that’s very important.

TVNewser: What have you heard about the future of Fox News Specialists?

Williams: I’m no mind reader. I have been told nothing. I know the investigation is ongoing and it’s being taken extremely seriously, I can tell you that much from the inside out. I am grateful for that it’s being taken seriously. Now, I can’t speak to what Fox News was before I started working there in a real capacity in September 2015, but I can tell you my experience since then has been positive in the sense that if there’s an issue, I personally can go to [Fox News human resources chief] Kevin Lord to have general conversation. I have not had complaints; that has not been my experience. But I am very comfortable going to Kevin Lord to have these dialogues and conversations about what I can personally do and what we can do at the network to make the environment safer and better for women, for people of color, for whoever might find it a challenging work environment because that’s something that cannot be the case. I think we all know being a network coming from [Rupert] Murdoch on down that there have been significant challenges that we have to eradicate. So that feels good.

Now I don’t know the status of The Specialists. All I can tell you is that I’m going to continue to show up and give a 1000% effort every hour because that’s what the audience deserves and that’s what I’m there for. So until I hear otherwise, I’m excited to go to work, and even on tough days like today where I got a lot of negative push back around my comments, it still feels like a privilege and a gift to be able to engage.

TVNewser: Have you heard anything about Laura Ingraham possibly getting her own show at the network?

Williams: No, I have not heard anything at all, internally. I have probably read the same things that you have, tweets from Drudge, and what have you. I can tell you that I’ve worked with Laura Ingraham a handful of times. She has been a guest on The Specialists. She used to fill in for [Bill] O’Reilly, and in my beginner days when I was just a guest on the network, I would be a guest on the show.

While we don’t have much political overlap, I can tell you that she has a brilliant legal mind and is a brilliant on-air talent. In my opinion, it would be a smart move by Fox to bring her on. I think she’s a powerful, female voice in a moment where frankly we can’t have enough of those.

TVNewser: What was your initial reaction when you heard about the accusations of harassment against Bolling?

Williams: First of all, I believe in innocence until proven guilty and I haven’t seen any specific evidence around this. But that’s just been my experience. But nothing really surprises me. I know Eric and appreciate him in a professional context and he has always been professional with me. That’s all I can speak to.