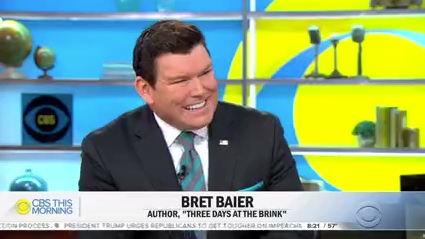 He was also asked his thoughts on Pres. Trump’s consistent public bashing of the press, as well as the departure of Shepard Smith earlier this month.

Co-host Tony Dokopouil asked for Baier’s reaction to  Smith’s recent departure from Fox News, a move that seemed to stun everyone in the media industry, including Baier and many of own colleagues.

I first worked with Shep on my first assignment at @FoxNews almost 23 years ago. It was a total shock today to find out he’s leaving. He anchored breaking news -fast-moving events —better than anyone. I wish him well in whatever lies ahead

Smith memorably closed his final FNC broadcast by saying, “even in our currently polarized nation, it’s my hope that the facts will win the day, that the truth will always matter, that journalism and journalists will thrive.”

Co-host Gayle King wondered aloud if that line was meant as a shot at his employer. “Was it interpreted as such inside the building?,” she asked Baier.

“It was his decision. I’m not going to speak for Shep,” Baier replied. King responded by saying, “but that’s not speaking for Shep. I’m just wondering how you interpreted that. I know it was his decision, but did you all interpret it as ‘he’s taking a dig at us as he walks out the door?’”

“He’s concerned about journalistic coverage,” Baier responded. “I think he was proud of the news division at Fox. There’s obviously an opinion side too, and he made a choice to leave. I’m happy that the show is going to be all news, and we’ll be in the circle.”

“It’s part of the deal, as you guys know,” Baier responded. “Listen, we’re trying to call balls and strikes. If we can do that every day, be fair to him, but also cover the news fairly to all sides, that’s what I’m trying to do.”

When asked about the notorious “enemy of the people,” line, Baier remarked: “I think it’s a problem. I don’t love that — that’s a bad phrase. I think it’s we’re all trying to do our job.”