NEXT:The Top Cable News Programs of May 2018
PREVIOUS:Joy Reid Promoted a 9/11 Conspiracy Documentary on Her Blog 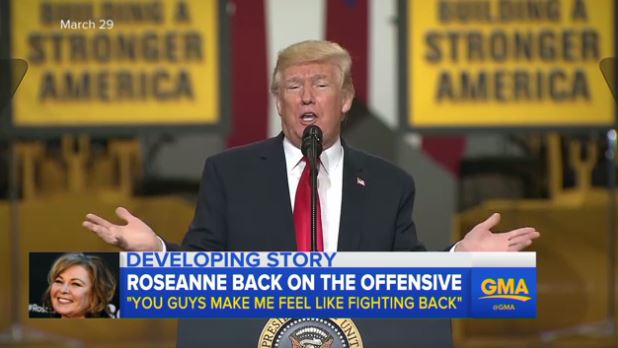 For the second time in 20 hours, Pres. Trump has angled for an apology from Disney boss Bob Iger.

In a tweet this morning, Trump called out ABC’s former chief investigative reporter Brian Ross who was suspended late last year, then re-assigned for his shoddy reporting on the Russia investigation.

On Dec. 2, Ross reported that former National Security Adviser Michael Flynn “is prepared to testify that Pres. Trump–as a candidate, Donald Trump–ordered him, directed him to make contact with the Russians, which contradicts all that Donald Trump has said at this point.”

“We deeply regret and apologize for the serious error we made,” an ABC News spokesperson said in a statement the following day.

So, technically, the network has apologized, but not enough for Trump:

Iger, where is my call of apology? You and ABC have offended millions of people, and they demand a response. How is Brian Ross doing? He tanked the market with an ABC lie, yet no apology. Double Standard!

Yesterday, in his first comment about ABC’s decision to cancel Roseanne, Trump lamented that Iger never called him to apologize:

Bob Iger of ABC called Valerie Jarrett to let her know that “ABC does not tolerate comments like those” made by Roseanne Barr. Gee, he never called President Donald J. Trump to apologize for the HORRIBLE statements made and said about me on ABC. Maybe I just didn’t get the call?