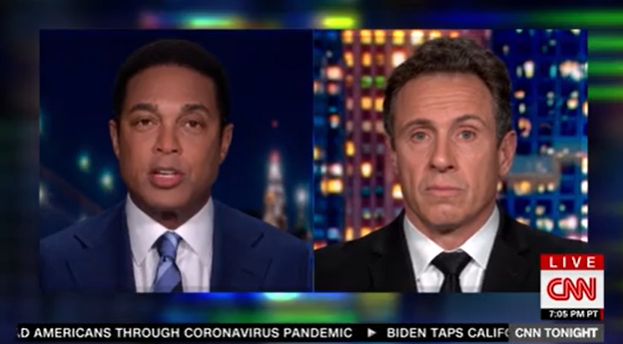 Last night on CNN, Chris Cuomo and Don Lemon discussed the Fox News-Newsmax dynamic during the handoff between their prime time shows.

Lemon has been around the block for a little while, and has seen the ebbs and flows of TV news ratings wars, and while he has been extremely critical of Fox News over the years, he believes the up and coming Newsmax, while “hot” right now, will prove to be no threat to Fox’s longtime ratings dominance.

The discussion arose when Cuomo noted that, for just one hour on Monday, Newsmax beat Fox News in the key A25-54 demo (Greg Kelly defeated Martha MacCallum at 7 p.m., 229k adults 25-54 vs. 203k adults 25-54), placing FNC in 4th on cable news. Lemon argued that FNC has long had a monopoly on conservative viewers, especially in prime time, and that they’ll come home to roost, so to speak, come March.

Here’s the other thing we’ve been dealing with; the other cable networks have had competition, right? The competition for people who said they’re non-biased, they’re in the middle, that they’re independent. Fox News didn’t have any competition because Fox News is the only far right conservative network. Now, they have some competition. So, the playing field in some way is leveling. It will moderate. Trump will be marginalized somewhat by March, and Fox News will be a shell of its former self, but still very powerful.”

During the UBS Global TMT Virtual Conference Fox Corp. CFO Steve Tomsic remarked: “We don’t have a hubris bone in our body, so we don’t take lightly the potential for competition, whether its the existing sort of classic MSNBC or CNN, or the sort of emerging ones like Newsmax and OANN.”

He added: “But when we look at, or anybody else that might emerge for that matter, when we look at Fox News, and I think people take the simplistic view and many of them are not viewers of Fox News, that Fox News is simply the sort of three hours of primetime that take place Monday through Friday. The service and the actual business is so much broader than that, and so it is a 24/7 news operation. It took us a billion dollars in cash burn to get Fox News to profitability. It’s not a small undertaking to try and sort of compete at that level.”

According to S&P Global Market Intelligence’s Kagan, FNC will generate an estimated $1.19 billion in net advertising revenue this year, and an additional $1.62 billion in affiliate revenue.

Newsmax TV, meanwhile, is on track to generate an estimated $25 million in net ad revenue, according to Kagan (which does not track digital revenue). The network does not charge affiliate fees and receives no affiliate revenue, as a result.

Still, in a conversation with Adweek last month, Newsmax CEO Chris Ruddy was very optimistic that his network will one day catch up to its rival: “The numbers are a lot closer in actual reach, even though there isn’t really the third-party rating yet on the OTT side,” he said. “But the audience is there.”

In a separate statement this morning, Ruddy added: “Newsmax has seen continuous and consistent ratings growth on MVPDs and OTT for the past 18 months. It will only continue.”