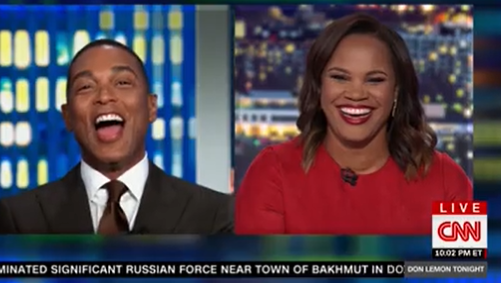 It’s been a whirlwind 24-36 hours for Don Lemon. He was in the U.K. covering the passing of Queen Elizabeth II and—while flying back to New York to do his long-running primetime show Don Lemon Tonight—it was announced that he would be moving from primetime to the morning later this year, after eight and a half years in the daypart, joining colleagues Poppy Harlow and Kaitlan Collins for a new 6-9 a.m. ET CNN offering.

Laura Coates, guest-hosting the 9 p.m. CNN Tonight on Thursday, greeted Lemon during the toss with a “good morning.” Lemon, amused by the comment, proceeded to the imminent move—first thanking his producers, including his longtime ep Maria Spinella. All of the Don Lemon Tonight producers will remain in the daypart and not join Lemon on the morning program.

Lemon then mentioned discussions he had with Chris Licht about the switch—and cleared up any confusion about the move on Thursday night:

I was presented with an opportunity that I can’t pass up at this network. We have a new boss who is a morning show empresario—and he wants a morning show that will kick off the editorial direction of the network every single day. And I’m honored that he asked me do it.

For all of those out there who are saying—”Oh, he moved me without my—” he asked me and I said yes. I could have said “No, this is my show, I have a contract for this show.” I decided I would take him up on that and take this journey with him. By the way, this is not someone moving me and this is not someone saying, “You must move to the right, Don Lemon, you must not give so much of your perspective.” None of that has happened, all of that is fodder for Twitter, which is not real. So, stop it. I was not demoted, none of that. This is an opportunity. This is a promotion. This is an opportunity for me to create something around me and I get to work with two great ladies who you know—Poppy Harlow, who I have known for more than a decade. I went to her wedding in Slovenia. I know her children and husband. And Kaitlan Collins, same thing, we have been friends since Kaitlan has been at the network. It’s really great. The only thing is—the boss laughed and said, “I’m going to have to put some extra money in the budget to have someone come out to your house and wake you up every morning.”

Since I have been in this business since the 1990s, seriously, I have only been on the night shift … It’s going to take some getting used to.