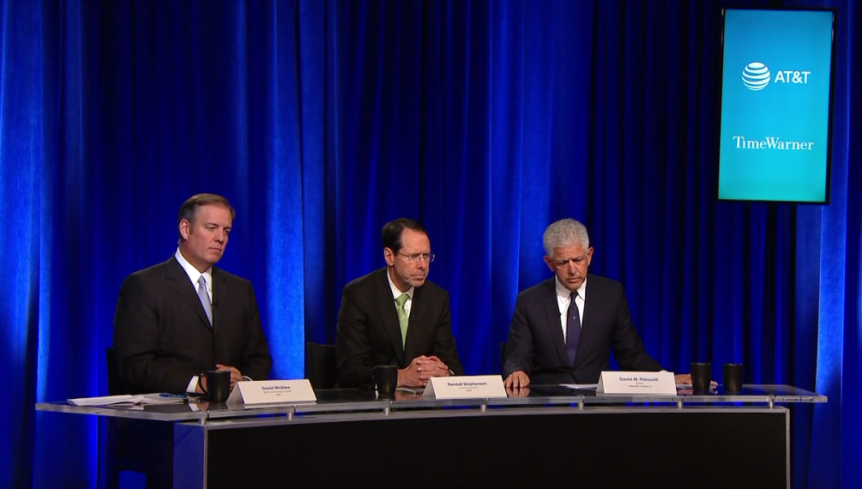 The U.S. Department of Justice is suing AT&T to block the merger with Time Warner.

The suit was filed in federal court today, with the DOJ saying this merger goes against U.S. antitrust law because AT&T would “use its control of Time Warner’s popular programming as a weapon to harm competition.”

“We’re surprised to be here, and candidly I’m a bit troubled by it,” said a visibly unhappy Stephenson during the webcast. “The best legal minds in the country agreed this deal would be approved, and the government’s suit stretches the very reach of antitrust law beyond the breaking point.”

When asked if tension between the sitting administration and CNN has anything to do with the lawsuit, Stephenson said “Frankly, I don’t know,” but went on to say that any agreement that results in the company forfeiting control of CNN is a “nonstarter.”

“Vertical mergers like this one are routinely approved because they benefit consumers without removing any competitor from the market. We see no legitimate reason for our merger to be treated differently,” AT&T senior evp and general counsel David McAttee II said in a statement earlier in the day. “The deal will make TV more affordable, innovative, interactive and mobile. Fortunately, the Department of Justice doesn’t have the final say in this matter. Rather, it bears the burden of proving to the U.S. District Court that the transaction violates the law. We are confident that the Court will reject the Government’s claims and permit this merger under longstanding legal precedent.”

The $85 billion deal for AT&T to acquire Time Warner was announced in October of last year, but Trump has said, going back to his 2016 presidential campaign, that he would block the deal if elected president.

And he has continued to maintain that stance.

Back on Nov. 9, he told CNBC’s Andrew Ross Sorkin that he does not plan to sell CNN, something he has said repeatedly over the past 13 months, and is frustrated that the merger still has not received regulatory approval.

“We need to move this along. It has been a year-plus…Either we settle or we litigate.”

“It’s a big deal to suggest that I volunteered to sell this asset (CNN) to get the deal done,” Stephenson continued. “To have anyone thinking we are prepared to do this is harmful. I needed to set the record straight. It has been over a year and we can’t talk to anyone at Time Warner about any of this. They’re sitting on pins and needles over there.”