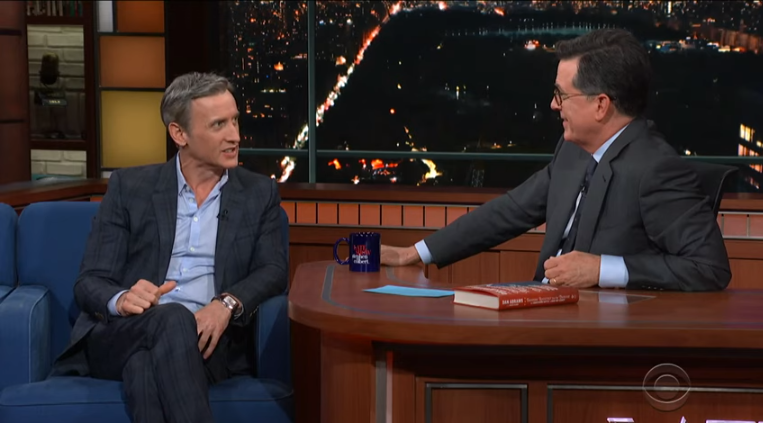 ABC News chief legal analyst Dan Abrams appeared on The Late Show with Stephen Colbert Friday night, in part to promote his new book Theodore Roosevelt for the Defense: The Courtroom Battle to Save His Legacy.

However, the conversation didn’t open about the latest Trump-related news of the day, or even the book. Colbert asked about Abrams’ previous life at MSNBC.

Colbert told Abrams he used to regularly watch his old MSNBC show The Abrams Report and asked him why he would “ever leave camera” to become the general manager at MSNBC (June 2006-Oct. 2007).

Abrams remarked that sometimes “it’s a lot more fun being the on-air person complaining about management than it is being the management being complained about.”

Abrams would leave the MSNBC GM role in late 2007, and became host of a new show in the 9 p.m. hour named Live with Dan Abrams. He quipped to Colbert that MSNBC made “the worst decision and they still regret it to this day,” when they replaced his 9 p.m. show in 2008 with Rachel Maddow.

Abrams left NBC News in 2011 to join ABC News. He was later named Nightline anchor and chief legal affairs anchor in June 2013. In December 2014, he stepped down from those roles and into his current role of ABC News chief legal analyst.

In addition to his work appearing across all ABC News programming, Abrams hosts a daily Sirius XM radio show, and A&E’s Live PD, the No. 1 basic cable entertainment series among adults 18-49. he also runs Abrams Media, which includes the OTT and linear network Law&Crime.