NEXT:40 Years of 20/20 'A Remarkable and Historic Achievement'
PREVIOUS:'A Lot of TV News Is Designed More to Alarm Than Inform' 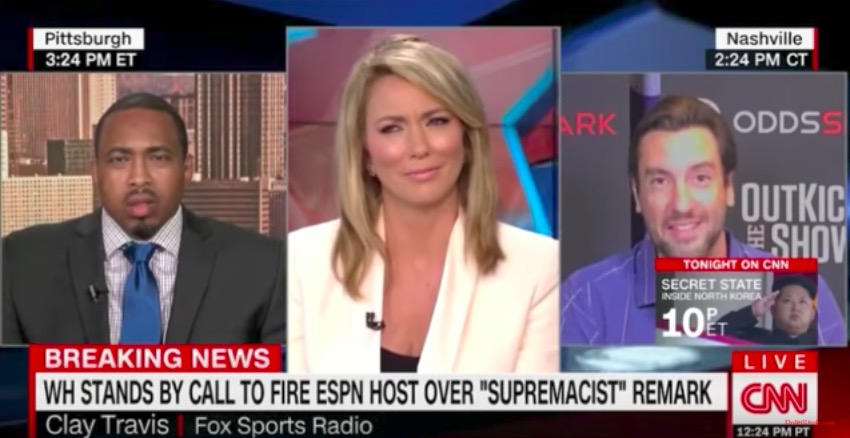 Travis, who was among the first to criticize ESPN host Jemele Hill for her comments about Pres. Trump, went on Baldwin’s show and repeated a line he uses often on his radio show: “I believe in only two things absolutely: the first amendment and boobs.”

Baldwin was first confused. Then surprised. Then done with it.

“I’ve been a journalist for 17 years — the past seven spent at CNN hosting a live show,” she wrote in an op-ed today on CNN.com. “I’ve seen and heard some things. But when I first heard ‘boobs’ from a grown man on national television (in 2017!!!) my initial thought bubble was: ‘Did I hear that correctly?? There’s no WAY he just came on my show and said what I think he said. … DID HE?'”

In her op-ed, Baldwin also took note of the news outlet Travis works for: “He works at Fox Sports Radio. Maybe he should learn from folks over at Fox News — being demeaning to women does have consequences.”

As for Travis, whose radio show is on 250 stations across the U.S., he says his initial comments on Hill as well as his CNN interview have given his brand a boost. He says he’s added 20,000 followed, adding, “This is the biggest week of the podcast we’ve ever had. He’s also had to make clear he is not a Trump supporter.

“I have never voted for a Republican for President,” he tweeted Saturday. “Double Obama voter.”