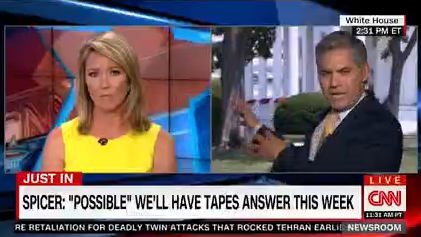 The press corps was thrown for a loop when the daily on camera briefing was changed to an off-camera, no-recording session. And CNN’s Jim Acosta, for one, wasn’t having it. During a Q&A with Brooke Baldwin after the non-briefing, Acosta went off:

“When Sean Spicer, the White House press secretary comes in and says you can’t record the video or audio from these briefings, that wouldn’t be tolerated at city council meetings. Here we have the representative of the President of the United States saying, ‘no, you can’t cover it that way.'”

Acosta then equated the current administration to bad reality TV.

And because he couldn’t record anything during the briefing, Acosta tweeted out this picture of his new socks.

The Spicer off-camera/no audio gaggle has begun. I can’t show you a pic of Sean. So here is a look at some new socks I bought over the wknd pic.twitter.com/wO9erspwYa