NEXT:Here Are the 10-Most-Read TVNewser Stories of 2019
PREVIOUS:Scoreboard: Friday, Dec. 27 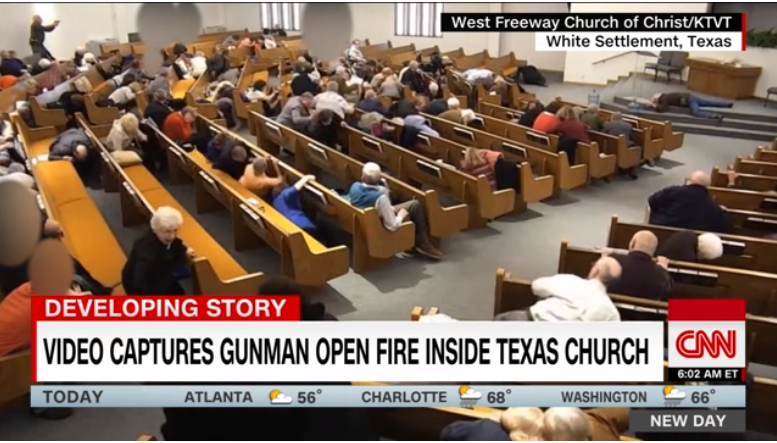 This morning, CNN New Day aired footage of the Fort Worth, Texas church shooting, from the exact moment when the gunman who perpetrated the West Freeway Church of Christ attack pulled out his weapon and started shooting parishioners.

The violence was captured on the livestream from the church’s service (obtained by CNN affiliate CBS 11-KTVT), and CNN aired the moment when the gunman fired off his shotgun before 2 volunteer members of the church security team shot him back. The state of Texas permits having weapons in places of worship.

Two out of the more than 240 people who were in the church at the time were killed by the gunman, who died from the return fire.

You can see the shooter standing up in the upper left hand corner of the video below, and of the screenshot shown above.

The shooting capped a violent weekend in America. Hours earlier, an attacker stabbed 5 people during a Hanukkah celebration at a rabbi’s home in Monsey, N.Y.,  a New York City suburb with a significant Jewish population.