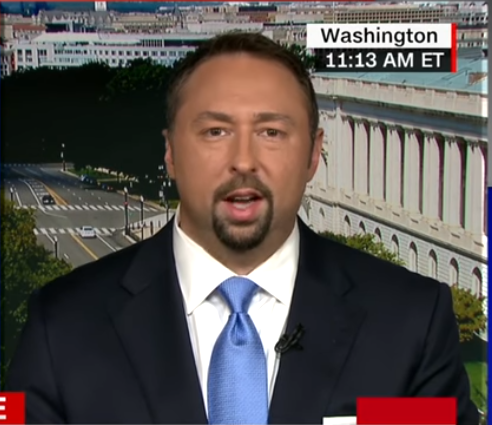 CNN political commentator Jason Miller has decided to step away from his role at the network in light of a recent report showing a legal filing that accuses Miller of secretly giving an abortion pill to a woman he was sleeping with without her knowledge.

“I have decided to step away from my role as a Political Commentator at CNN to focus on clearing my name and fighting the false and defamatory accusations made against me,” he said in a statement on his Twitter account.

News on my departure from CNN: pic.twitter.com/IjNIgeRPRF

TVNewser received confirmation from a CNN spokeswoman that Miller is no longer with CNN.

On Friday, a digital news outlet named Splinter reported that a child custody battle between Miller and a woman he used to date (fellow former Trump campaign staffer) named Arlene “AJ” Delgado got rather ugly after Delgado’s legal team filed legal documents earlier this month in Miami-Dade Circuit Court accusing Miller of impregnating a woman he met at a Florida strip club; and then upon finding out she was pregnant, “surreptitiously dosed her” an abortion pill without her knowledge.

Here are Miller’s previous tweets pushing back against the report:

6) I will clear my name in this matter and seek to hold Ms. Delgado, Splinter and anyone else involved in spreading these lies legally accountable.

5) The family court Judge involved in our case in Miami-Dade Circuit Court recently raised serious issues surrounding Ms. Delgado’s emotional and mental health. Any reporter wanting the facts about this can contact me directly.

4) Ms. Delgado was previously subject to a five-year restraining order for cyberstalking… https://t.co/inlOilH3QT

3) Splinter also failed to do anything to corroborate the accuracy of Ms. Delgado’s defamatory accusations, which have already been disproven by at least one reporter whom Ms. Delgado attempted to involve in her continuous attempts to smear me.

2) This “story,” replete with assumptions, misstatements and fraudulent statements was wrongfully published by the gossip blog Splinter despite the obviousness of its falsity and lack of factual support.

1) There is no validity to the false accusations made in the document Arlene “AJ” Delgado filed herself, without an attorney.