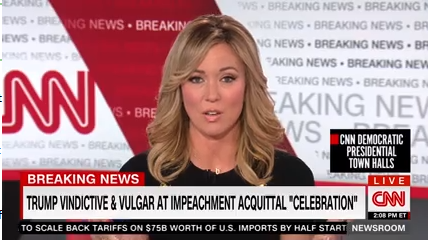 Many CNN journalists have been less than impressed with President Trump’s behavior throughout his presidency. OK, that’s probably an understatement.

During Trump’s lengthy speech this afternoon in the East Room, CNN took a new step and showed a rather bold live graphic towards the bottom of the screen, or lower third. The network referred Trump as “vindictive and vulgar.” 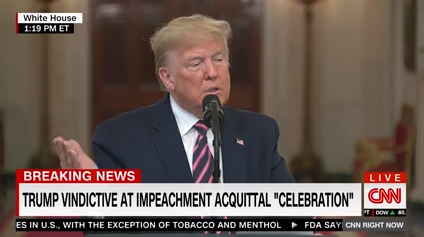 After the president’s speech, during the 2 p.m. ET hour of CNN Newsroom with Brooke Baldwin, he’s “vindictive and vulgar.”

CNN White House correspondent John Harwood, a vehement critic of Trump, went on to say that Trump’s remarks were “a very disturbing tableau for the country” made by “somebody in deep psychological distress.”

At one point during the speech, POTUS referred to the impeachment trial as “bullshit,” undoubtedly much to the dismay of the broadcast networks showing the remarks, as well as Trump’s own FCC.

In addition to touting his accomplishments and thanking his supporters in congress for their support before and after the trial, he attacked Speaker of the House Nancy Pelosi and Sen. Mitt Romney’s personal faith.

“I had Nancy Pelosi sitting four seats away, and I’m saying things that a lot of people wouldn’t have said, but I meant every word,” Trump said.

He also said that Sen. Romney used his faith “as a crutch,” adding, “He never used it before.” He then went on to call Romney a “failed presidential candidate” who “failed so badly.”