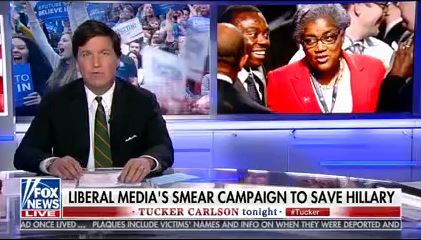 CNN is responding to an accusation made by Tucker Carlson on his Fox News show last night, that CNN anchors have been instructed to “undermine” Donna Brazile as it covers her new book about the 2016 race.

“According to highly informed sources we spoke to, top management at CNN directed its employees to undermine Brazile’s credibility,” Carlson said on his show last night. “Anchors and producers
were vocally offended by her attacks on their friends, the Clintons,” Carlson added. He then played two clips, one from Anderson Cooper and another from Brooke Baldwin, supporting his claim.

“Any suggestion that CNN has ordered its employees to undermine Donna Brazile is false,” a network spokesperson said.

Literally no one at CNN has said anything to me about how to cover Brazile. We’ve covered her allegations a bunch & never trashed her once. https://t.co/0zbWa1ai3N

In October, 2016, Tapper called it “horrifying” that Brazile, then a CNN contributor but also interim chairman of the DNC, was leaked a question that was to be asked of then-candidate Hillary Clinton at a CNN political forum held in March 2016. Brazile abruptly resigned from CNN after Wikileaks revealed an email about it.

This isn’t going away just yet, Brazile will be a guest on Carlson’s show tomorrow night.