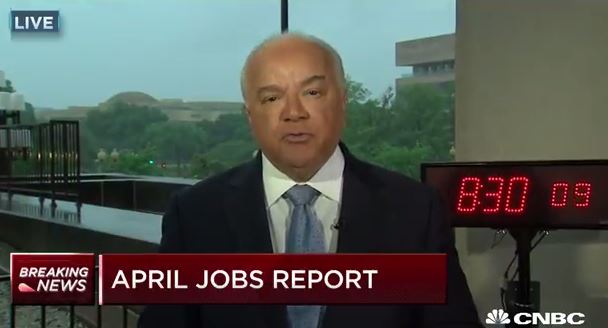 “In my years here, no one has defined the phrase ‘class act’ more than Hampton,” wrote CNBC’s White House correspondent Eamon Javers on twitter. “Here’s to a great retirement for a great colleague!”

Pearson has been with the business network for 23 years joining in 1995 from then-NBC affiliate WBZ in Boston.

Earlier in his career, he was a reporter/producer for the Washington bureau of CBS News and reporter/bureau chief for KRON-TV, San Francisco. He has been covering presidential news, including campaigns, inaugurations and summit meetings since 1976, CNBC said.

Pearson may be best known to CNBC viewers for being stationed outside the Labor Department on the first Friday of every month, announcing the monthly labor statistics.

CNBC chairman Mark Hoffman and svp and editor in chief of Business News Nik Deogun sent the below email this morning to staff:

After a sterling 23-year career at CNBC, Hampton Pearson, a mainstay of our news coverage from Washington, D.C., has decided to retire, effective June 15.

We will all miss Hampton greatly, not just for his even-handed reporting and authoritative delivery, but also because in the hyper-competitive news business, Hampton has always been a perfect gentleman, willing to take on any assignment.

Hampton joined CNBC in 1995 from WBZ in Boston, where he focused on politics. During his tenure at CNBC, Hampton was a pillar of our 1996 election coverage, subsequently reporting on the Clinton White House. He then closely followed the Microsoft anti-trust case and has been our point person on the Supreme Court and other big business cases ever since. (We are hoping the judge decides the AT&T-Time Warner case before June 15!)

Long before TV cameras were allowed inside the Federal Reserve, Hampton spent years in the basement of the Treasury Department reporting on the interest rate moves—via telephone.

Of course, for the past 20 years, Hampton has become synonymous with the monthly jobs report and has made that 8:30 am announcement on the first Friday of every month one of the highlights of our coverage.

We want to thank Hampton for being a great colleague and friend over the years. The Washington Bureau will toast Hampton closer to his departure date. In the meantime, please join us in wishing him all the very best as he relocates to Scottsdale, AZ.