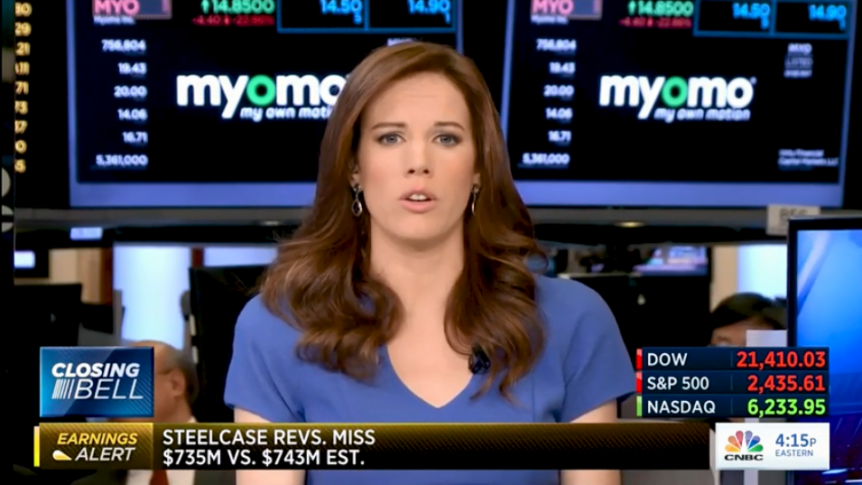 CNBC is transforming its weekday afternoon lineup, highlighted by a new program anchored by Kelly Evans called, The Exchange.

The show is currently in development under the direction of senior ep of program development (and former Squawk Box ep) Matt Quayle and executive producer Sandy Cannold, and is set to launches on Jan. 7 in the 1 p.m. hour.

According to a note from CNBC svp of business news programming Craig Bengtson, “The Exchange will focus on in-depth reporting on topics and issues of interest to investors,will take further advantage of the network’s deep roster of highly-skilled television and digital reporters.”

The addition of The Exchange means that Power Lunch will become a one-hour program, airing in the 2 p.m. timeslot. Evans will remain on-air to co-anchor Power Lunch, along with Tyler Mathisen, and Melissa Lee, with Cannold at the helm as ep.

As mentioned, Eisen and Frost had co-anchored Worldwide Exchange together until March, when Eisen moved to the 1 – 3 p.m. edition of Power Lunch, alongside Mathisen, Lee, and former CNBC anchor Melissa Caruso-Cabrera, and Frost moved to Closing Bell, alongside Evans.

Eisen will assume her new role on Closing Bell immediately.

Here’s the full note from Bengtson:

I’m pleased to announce CNBC will launch a new afternoon program, “The Exchange,” on Monday, January 7, anchored by Kelly Evans.

The show, in development under the direction of Senior Executive Producer of Program Development Matt Quayle and Executive Producer Sandy Cannold, will focus on in-depth reporting on topics and issues of interest to investors.  Scheduled to air from 1pm to 2pm ET, the program will take further advantage of the network’s deep roster of highly-skilled television and digital reporters.

Following the premiere of the new show, “Power Lunch” will be a one-hour long program from 2pm to 3pm ET, anchored by Tyler Mathisen, Melissa Lee and Kelly Evans. Sandy will lead both shows.

Next week, when Kelly returns, she will join her colleagues in the 2pm hour of “Power Lunch.” Tyler and Melissa will continue to make their enormous, daily contributions to the network.  Tyler will remain focused on the company’s growing events business, serving as Vice President of Event Strategy. Melissa will continue her critical role throughout the Business Day, including anchoring “Fast Money” and “Options Action.” In addition, she will expand her in-depth reporting, partnering with the Business News Specials and Investigative team on long form projects covering a wide range of important topics.

After successfully re-launching “Worldwide Exchange” from the U.S., in 2016, Sara Eisen and Wilfred Frost will team up again to permanently co-anchor “Closing Bell,” joined by Senior Markets Analyst Mike Santoli from 3pm to 5pm ET. This change will take effect immediately.

Please join me in supporting our colleagues during an exciting time as we all work to grow and differentiate our Business News Day programming.