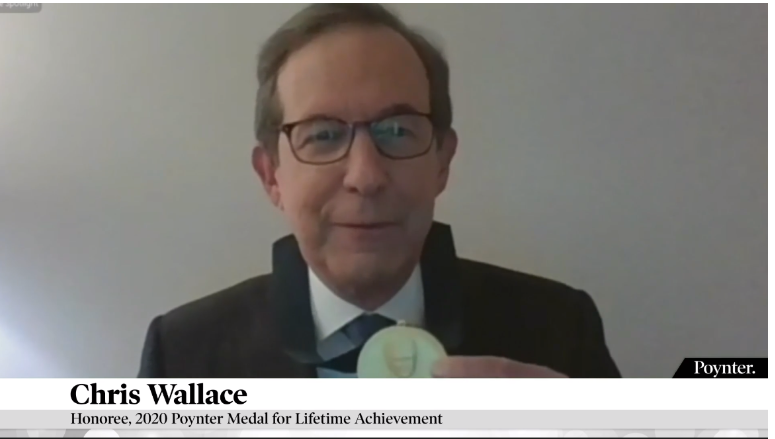 Wallace’s acceptance remarks touched on a wide range of subjects, everything from his friendship with George Clooney to his thoughts on the news and opinion sides at Fox News, as well as polling.

He seemed to take issue with media critics who are always asking for his thoughts on the news and opinion sides at Fox News, and wonders why journalists at CNN and the New York Times aren’t being asked similar questions by media critics.

On the difference between news and opinion at Fox News:

“It seems to me that if viewers don’t notice the difference between me and some of my colleagues on the news side, and let me tell you, if you read my emails, viewers know the difference between me and the prime time people. So they get it. They don’t always like it, but they understand it. And when I talk about a firewall, the reason I talk about that is – I don’t mean this to be, you know, go after other people.

But at Fox, the people who are anchoring on election night, you know, it was Bret Baier and Martha MacCallum and I was the chief analyst. You know, we’re all straight news people. You watch NBC or MSNBC and it’s Rachel Maddow anchoring the news coverage. It’s Anderson Cooper and Chris Cuomo anchoring the news coverage. You know, it isn’t our opinion people anchoring our news coverage. So I actually do think there’s more of a firewall. I will say something else because I do get lots of questions about how do you live with, you know, the prime time people.

You know, I did a thing at Columbia Journalism School with Maggie Haberman and, you know, at one point I said, you know, ‘Maggie, you ever get hammered by people saying, how are you able to live and distinguish yourself from Paul Krugman or Charles Blow?’ People that are on the opinion page, the op-ed page of The New York Times who are very, very liberal and certainly as opinionated as anybody at Fox. And I think one of the reasons that The New York Times or CNN don’t get these questions so often is because the media critics, you know, they like what those people are saying, so they don’t object to it as opposed to what our people in prime time are saying, which they don’t like. So it becomes more of an issue. But in fact, to me, it’s the same issue as a news site and that’s an opinion side. And whether you agree with the opinion or disagree with the opinion, it’s still opinion. Now, as far as me calling them out. You know, you mentioned Roger Ailes a few times and he used to say ‘no shooting inside the tent.’ And by that, he meant we’ve got enough people coming at us from all sides. We’re not going to criticize each other. And if you’ve got a problem, we can talk about it internally, but we’re not going to attack each other. And I think that’s pretty good advice. I have occasionally strayed and I’ve regretted it. Not because of any repercussions.”

On who anchor Chris Wallace would like to interview that he has not had the chance to yet:

“You know, I’ve been asked this before, and I’m going to give an answer that I suspect nobody is going to believe but I would love, If she were really willing, when you hear this, to let down her hair and tell the truth, I would love to interview Queen Elizabeth. And I say this as somebody who is, I’m sure, like a lot of the folks out there, a devotee of The Crown. And when you think, I mean, she came in in 1952, she’s had, I don’t know how many prime ministers, I don’t know how many presidents. She’s seen it all. I mean she really has been an eyewitness to history for the last half of the 20th century and now the first 20 years of the 21st. If you could ever get her to actually give her real impressions of people, my guess is it would be absolutely fascinating. So I’ll say her.”

Wallace also gives his two cents on how the media covered the election:

On how well the media did in covering the 2020 election:

“Well, you know, it’s an interesting thing. The polls obviously did not accurately predict this election, just as they did not accurately predict it in 2016 and we kept hearing after 2016, well, it’s broken. We didn’t get the white blue collar workers, working class people who were in the upper Midwest who were the basis for Trump’s support and the basis for him breaking down the blue wall of Pennsylvania, Michigan and Wisconsin. Well, it seems to have happened again, not only there, but in other parts of the country. I don’t know what it would take for me to now read a poll and to believe it. And, you know, on the one hand, as I’m not a pollster, I’m not directly involved. But it is something that we at Fox and a lot of other news organizations put out. So I’m troubled at the idea that we’re putting out information, one that turns out to be wrong and two, that people are losing confidence. And the good aspect of it is that I think polling does become kind of an excuse for lazy reporting that we don’t go out and talk to enough people. We just say, well, there’s a poll in some state and they think that Biden’s ahead. I mean, there was a poll a week before the election, ABC-Washington Post, that Biden was up 17 points in Wisconsin. Obviously, that was terribly wrong. And, you know, maybe if we’d done more reporting on the ground in Wisconsin, we would have known or had a better sense that was terribly wrong. So in that sense, our failure and our repeated failure in 2016 and 2020 in the polling maybe will spur us to do more, you know, on the ground, talking to real people, reporting.”