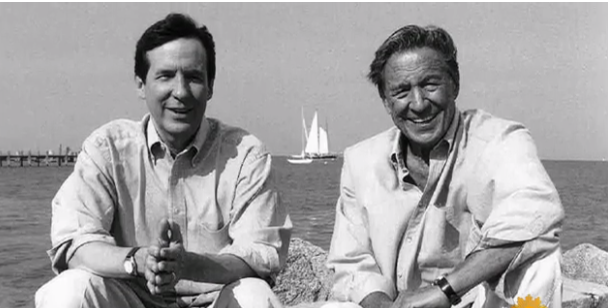 The son of TV news royalty (and someone who has carved out a pretty successful career in his own right), Chris Wallace was featured on CBS Sunday Morning over the weekend to discuss a new documentary about his father, the late, legendary 60 Minutes correspondent Mike Wallace.

During the interview, Wallace showed the crew (and Sunday Morning correspondent Rita Braver) his father’s old Rolodex of sources saying “I don’t think there was ever anybody better than him on TV and in an interview, but he was first and foremost a great journalist.”

What was the family’s reaction to the early success of 60 Minutes? “Complete disbelief. It was fun, it was exciting, he was tickled by it but we were all really surprised it had happened,” said the Fox News Sunday anchor.

And perhaps the most important question of the interview from Braver: “Was it hard to be Mike Wallace’s son in journalism, or did it end up opening a lot of doors for you?”

“Yes,” Wallace responded, took a beat and added: “Then, when I became a young reporter, occasionally people would say, ‘Hey Mike,’ when they meant Chris, and that used to sting…It still happens occasionally today, but now I love it because it says to me that people remember him.”