NEXT:Scoreboard: Wednesday, Oct. 31
PREVIOUS:Bill Weir to Host Six-Part Series for Discovery Focusing on the Work of Law Enforcement at the Border 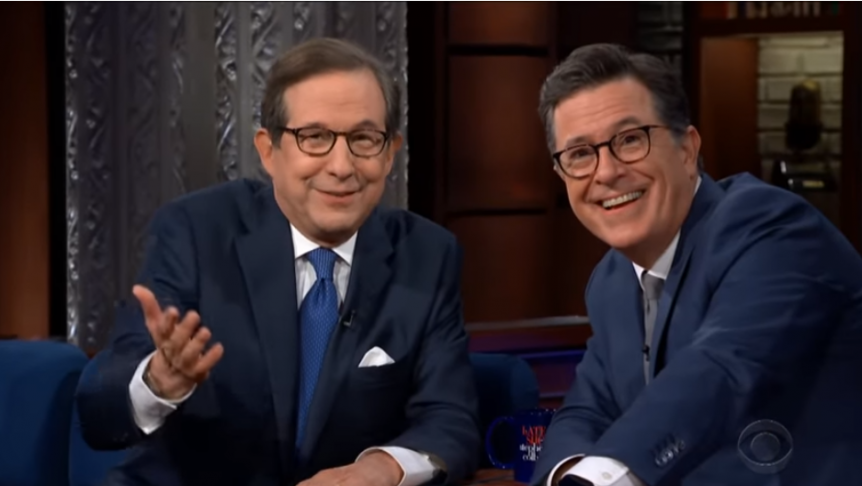 Chris Wallace appeared on The Late Show last night for what ended up being a playfully combative interview with his “brother from another mother” Stephen Colbert.

The two went back and forth on how this upcoming election compares with previous midterms, immigration and “migrant caravan,” the latter on which the two sparred for a few minutes.

Colbert ended up fact-checking Wallace’s statements on immigration at the end of the interview, which elicited an amusing reaction from the Fox News anchor.

Then, there was the subject of Trump’s treatment of the press.

Colbert asked Wallace an interesting series of questions: “Has he ever attacked you?” “Are you “fake news?'” “Are you an ‘enemy of the people?'”

“He’s let me know that he doesn’t think I treat him fair,” Wallace said.

“Are you an ‘enemy of the people?'” Colbert followed up.

“By his lights? I don’t know. Maybe a little bit.”

Wallace’s Media Institute Award win was brought up, where, in his acceptance remarks, he knocked the president for calling the press “enemy of the people,” yet also criticized the media for “playing his game.”

“We shouldn’t fight fire with fire,” Wallace told Colbert. “His job is to be a disruptor, our job is to be reporters, which means being umpires, calling balls and strikes, being fact checkers, pointing out when things are wrong…but we shouldn’t try to match his invective with our invective.”

The two then sparred over The Washington Post headline which connected the pipe bomber Cesar Yasoc to Pres. Trump. Wallace putting Trump’s name in the headline was unnecessary, while Colbert pushed back.