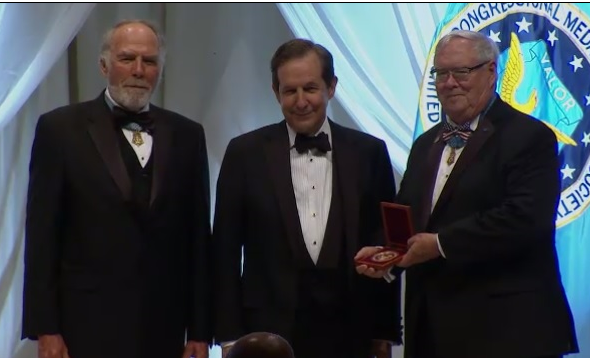 This past Friday, Fox News anchor Chris Wallace hauled in yet another award in recognition of his esteemed journalism career. This time, it was the annual Tex McCrary Award for Journalism by the Congressional Medal of Honor Society.

Each year, the Society holds its annual convention in a different city in the country with this year’s event being held at the U.S. Naval Academy’s Dahlgren Hall in Annapolis, Maryland.  More than 40 Congressional Medal of Honor Recipients were in attendance with their families.

This one was extra special for Wallace.

“I am honored to receive this award especially from people I respect so deeply,” said Wallace. “I am grateful you recognize the work of our Fox News Sunday team these past 15 years telling your story, we understand the military and their families are a big part of our Fox audience. And getting this award makes me more determined than ever to keep telling America about service above and beyond the call of duty.”

In conjunction with the conference, Wallace also moderated a town hall on Thursday with past Medal of Honor recipients, including the only surviving Marine from World War II Hershel “Woody” Williams, the most decorated living Navy SEAL Chief Petty Officer Edward Byers and a retired Marine who moved towards a live grenade in Afghanistan in 2010 to shield his fellow Marine from the blast William Kyle Carpenter.

You’ll probably recognize the other Patriots Award Gala Winners for 2018: