NEXT:June 7 Sunday Show Ratings: Face the Nation Earns Most Total Viewers; Meet the Press Remains No. 1 Among Adults 25-54
PREVIOUS:Don Lemon Has Become an In-Demand Voice on TV News During These Protests: 'This Is My Time to Be Me on TV' 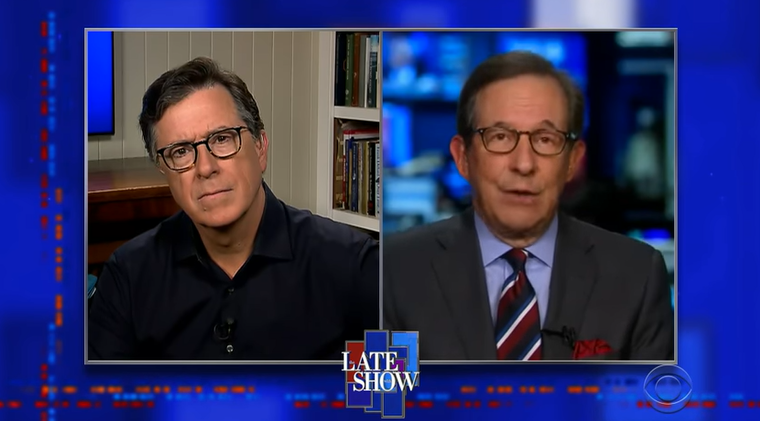 Fox News’ Chris Wallace is currently on a media tour for his new book Countdown 1945 (the story behind Harry Truman‘s unexpected swearing in as president and the first use of the atomic bomb), and he has appeared on ABC’s The View, and the CBS trio of CBS This Morning, CBS Sunday Morning and The Late Show with Stephen Colbert to promote it.

Wallace has become something of a fixture on Colbert’s program in particular over the past couple years, although the remote interview was a first.

When asked by Colbert whether he has ever seen anything like the moment we are facing today, Wallace said, “The only other year that comes to mind is 1968. I was a senior in college. … We had the Vietnam War raging,” said Wallace. “Lyndon Johnson the president suddenly resigned. Well, he didn’t resign, he said he wasn’t going to run for reelection. We had the terrible assassination of Martin Luther King. Cities on fire much more so than the protests this year. Then the assassination of Bobby Kennedy and then the protests and police beating of protesters in the streets of Chicago during the Democratic convention …”

Wallace conceded that while those particular events are worse than what we’ve experience so far this year, it’s “the same feeling of is the country just going to come apart.” The pandemic and economic collapse also make this year a unique one.

He was also asked to address this Trump tweet from April 12, where the president compares the Fox News anchor with his late father, Mike Wallace (an action he has also taken in the past).

Just watched Mike Wallace wannabe, Chris Wallace, on @FoxNews. I am now convinced that he is even worse than Sleepy Eyes Chuck Todd of Meet the Press(please!), or the people over at Deface the Nation. What the hell is happening to @FoxNews. It’s a whole new ballgame over there!

“Does it make you feel good when this happens?” asked Colbert. “If a journalist makes the comfortable uncomfortable, and the powerful a little bit on edge, haven’t you done your job?”

Wallace responded, “Yes, generally speaking, I would agree with that. Particularly if you make both sides mad,” to which Colbert noted that yes, he most certainly can make his side (the other side) mad.

Wallace beamed into The View the following morning, telling Whoopi Goldberg and her co-hosts, “When you are talking about race relations and police, I hope there is change,” adding, “I hope that there is reform and improvement. But I can’t say I am especially hopeful that it’s going to happen. Whoopi, you and I are roughly the same age. You remember 1968. You remember Rodney King. You remember Michael Brown and Ferguson. You remember Eric Gardner in New York City. They all have a similar pattern, which is that there is a case of undo violence. There are protests and calls for reform. … You hope that this time it will be different.”